What are the differences between the new Omega Seamaster Diver 300m Co-Axial MASTER CHRONOMETER and the previous versions which do not have the Master Chronometer designation?
For starters, this one has a transparent case back that lets you see the movement. Something that enthusiasts and collectors absolutely love.

On the outside, you can see the hot new wavy pattern on the dial reminiscent of the Seamaster watch featured in a 1995 James Bond film titled ‘Goldeneye’. Let’s not forget to mention a slightly larger case size of 42mm compared to the previous 41mm Seamaster.

Just by holding both in my hand, I can tell you that they pretty much weigh the same. In terms of looks, there are some similarities but some striking differences between these two watches as well.

Let’s look at some of the things that make this new 2018 Seamaster 300m different from its predecessor.

Let’s Begin with the Bezel: 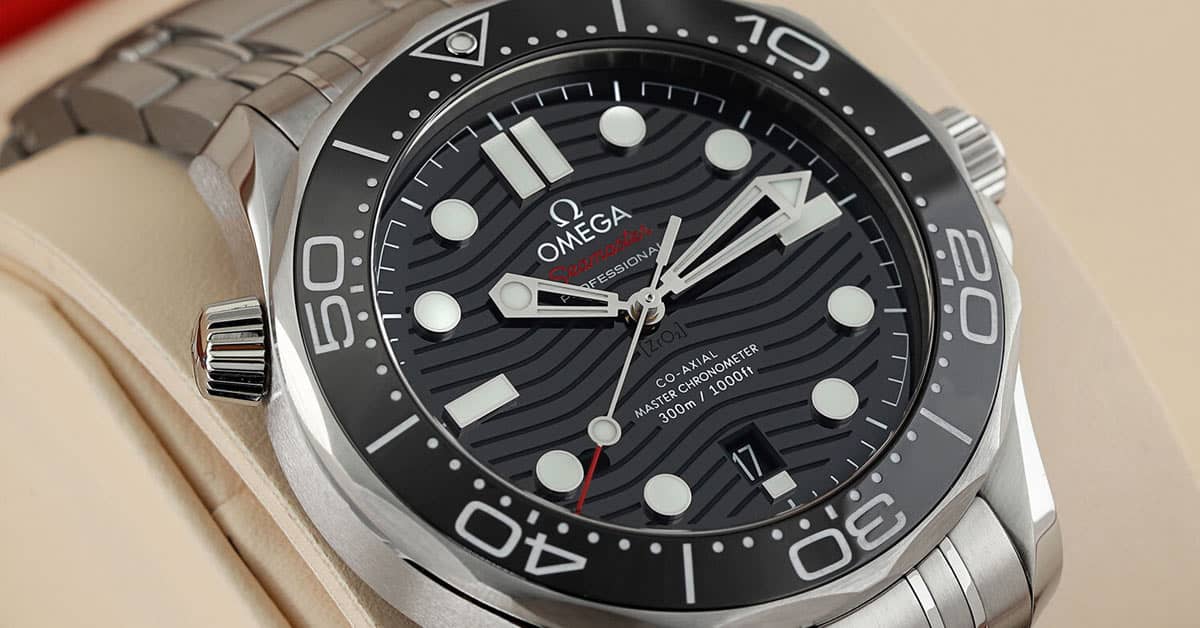 Let’s Compare the Case with the previous Seamaster 300m:

Time to Discuss to the Dial 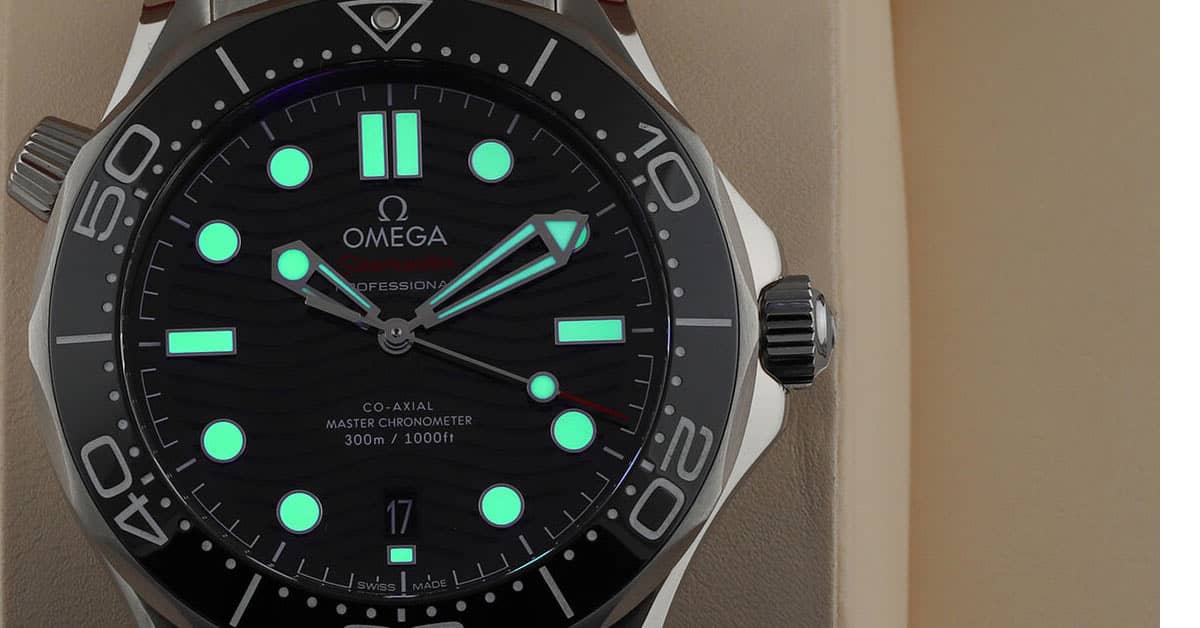 There are many new design variations and an improved helium escape valve, crown, and crown guards design but that’s not what you’re here for, is it?  Let’s pop that hood and talk about what’s going on inside the watch! Shall we? By the way, if you haven't had a peek at it yet click on the video button below.

To first understand the differences between the Omega Master Co-Axial caliber 8800 automatic movement that powers this new series, we should look at the self-winding movement that powered its predecessor, the Omega Caliber 2500 d. The previous Seamaster's movement had brought innovation to the Omega Seamaster 300m collection. This was the introduction of Omega’s patented Co-Axial escapement. Thankfully, it is also a highlighted feature in the new 2018 model. 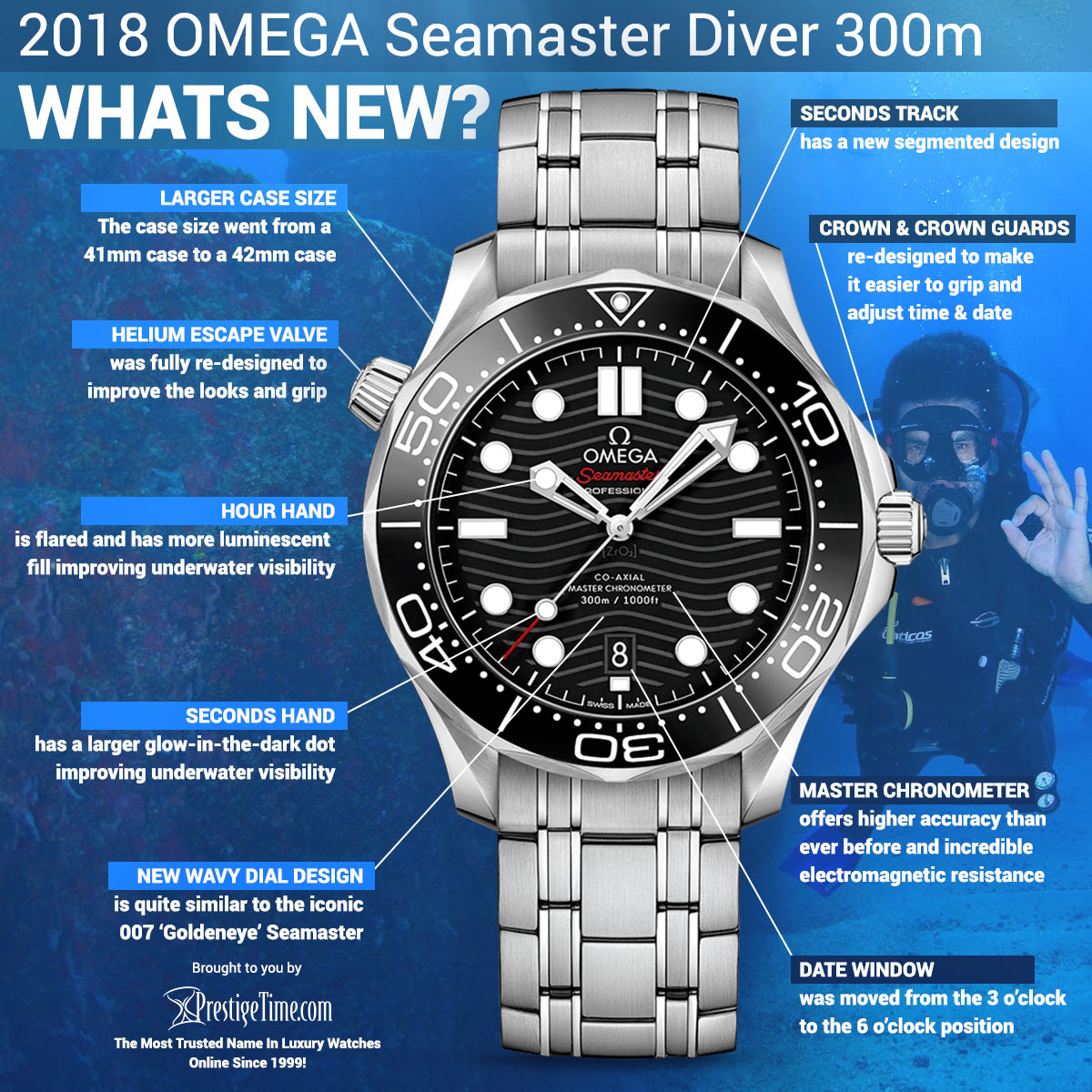 What makes the Master Chronometer different from a COSC Certified Chronometer?

The latest feature to embrace the Seamaster Diver 300m family is the coveted Master Chronometer designation. What exactly does this mean for your Seamaster watch? For starters: very high precision and excellent resistance to the enemy #1 of all mechanical watches; electromagnetic frequencies (EMF).

Using the button below, see how the Master Chronometer revolutionized Omega watches.

You have most likely seen the designation of a Chronometer on various luxury watches before. This designation originated for marine navigators to know that their watches meet the required precision to navigate the vast oceans timing their maneuvers to perfection.

Obviously, this was well before the GPS was ever invented but to sum it up in a nutshell, a 3rd party official Swiss chronometry lab called COSC tests the movement and if it passes all their requirements, COSC issues what’s called a ‘COSC certificate’. Once the watch movement receives this certificate it can thereafter be called a COSC certified Chronometer. To pass all the testing the watch movement must show a minimum accuracy of -4/+6 seconds per day.

The COSC Chronometer designation was at one point the highest designation that an analog watch can get. The Master Chronometer, on the other hand, took the testing several steps further. Not only does Omega send all their movements (also known as calibers) to the COSC facility for testing, but once they receive the COSC certificate they send it to another 3rd party lab known as METAS (a Swiss Metrology lab). This second lab not only tests to achieve even higher accuracy than a COSC Chronometer but perform all sorts of other tests. See the list below.

Once all this METAS testing is complete, the watch now has two pedigrees; one is the Chronometer designation from COSC, the other designation is from METAS and is called a MASTER CHRONOMETER. As you can see Omega is taking their job very seriously.

Their mission is clearly to provide diving professionals with the best diving watch in 2018. These improvements to the Seamaster certainly puts them ahead of the curve. Omega has also now applied the Master Chronometer designation to the Seamaster Chronographs. Things just get better and better!

To show special discounted pricing click on the button below.