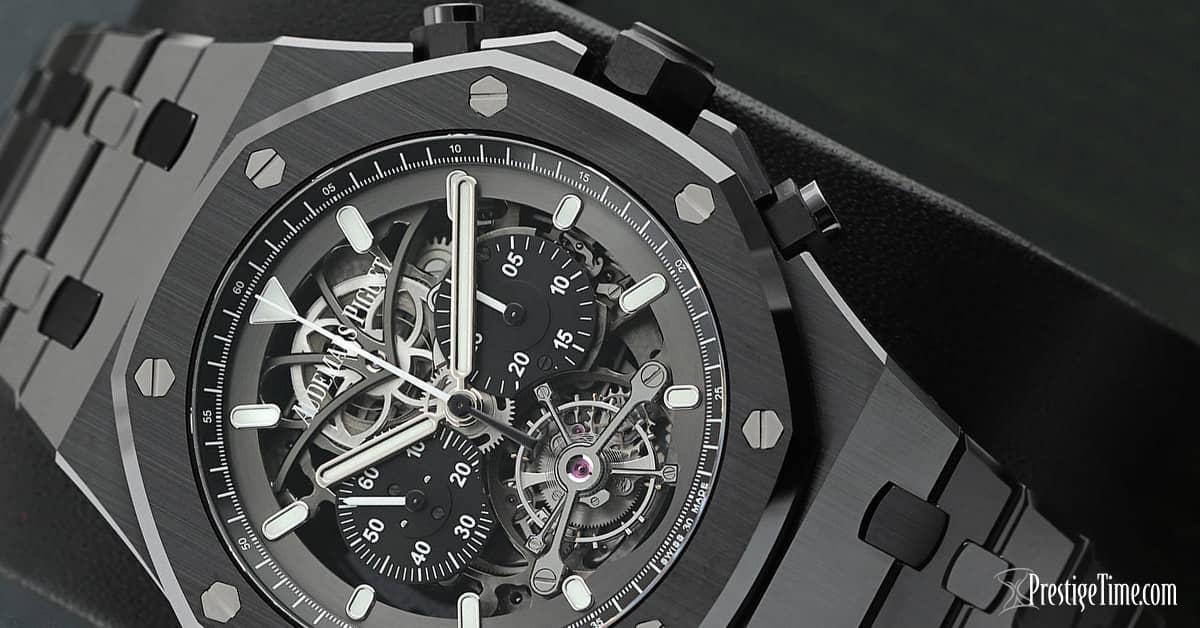 Join us as we explore a prized watch by any watch lover’s standards.

It’s not every day that I get to review an iconic Audemars Piguet watch, the likes of which only 100 exist in the world. This is as much a treat to me as it is for me to share with you. Let’s jump right in!

A few things about this Audemars Piguet Royal Oak watch make it uniquely special. Like we just mentioned, it is a limited edition with only 100 units made, so there is a good chance that you will never see another person wear one. In a world of copy-cats and unprecedented abundance, rarity and originality have become a thing these days.

But all vanity aside, it’s made of a highly scratch-resistant black ceramic material. Furthermore, it uses the same combination of brushed and polished finishing along with the case, bracelet and bezel as you would see on the precious metal and steel models that everyone has grown to love over the years. So, it is still true to the original just with some added benefits that will keep your watch looking newer for longer.

It was the early 1960s when watchmakers began experimenting with ceramics, Rado being the first. However, in the last few decades, it became very mainstream, even for upper-market luxury watch brands like AP and such. 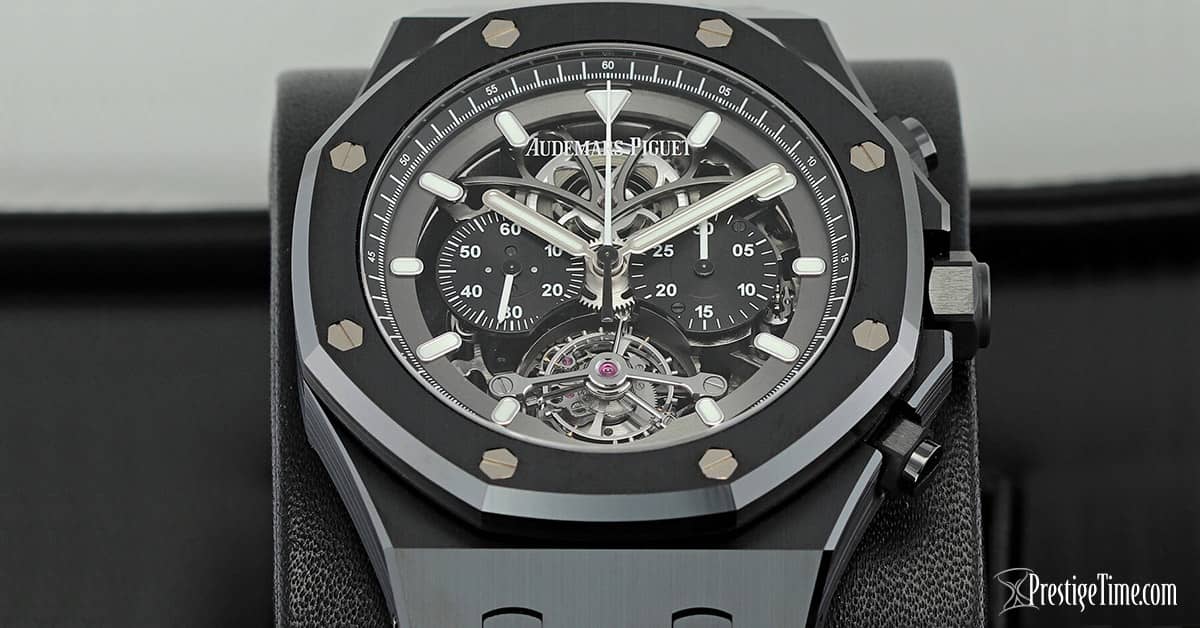 The case is 44m in diameter with a 13.20 case thickness and is sealed tight. The bezel is fixed to the case with 8 stainless steel hex-shaped screws. The transparent and scratch-resistant sapphire case back is sealed to the back of the case with an 8 round stainless-steel screw. Some special engraving can be found on the back of the case which says: “Royal Oak” on the top, and “LIMITED EDITION OF 100 PIECES” wrapping around the bottom.

This watch is also unique for its mechanical complexity. Equipped with a tourbillon which is a horological complication or mechanical feature known to improve precision by counterbalancing the drag that gravity puts on the movement when the watch is at different angles. Even if it didn’t have any benefit, it is mesmerizing to the eye to watch and will fascinate anyone who sees it in action.

The tourbillon cage can be found at the 6 o’clock position on the open-worked dial. The baton-shaped hands on the dial are made of polished white gold and are filled with a luminous material that glows in the dark green just like the matching rounded index hour markers and downward-facing triangle at the 12 o’clock position. 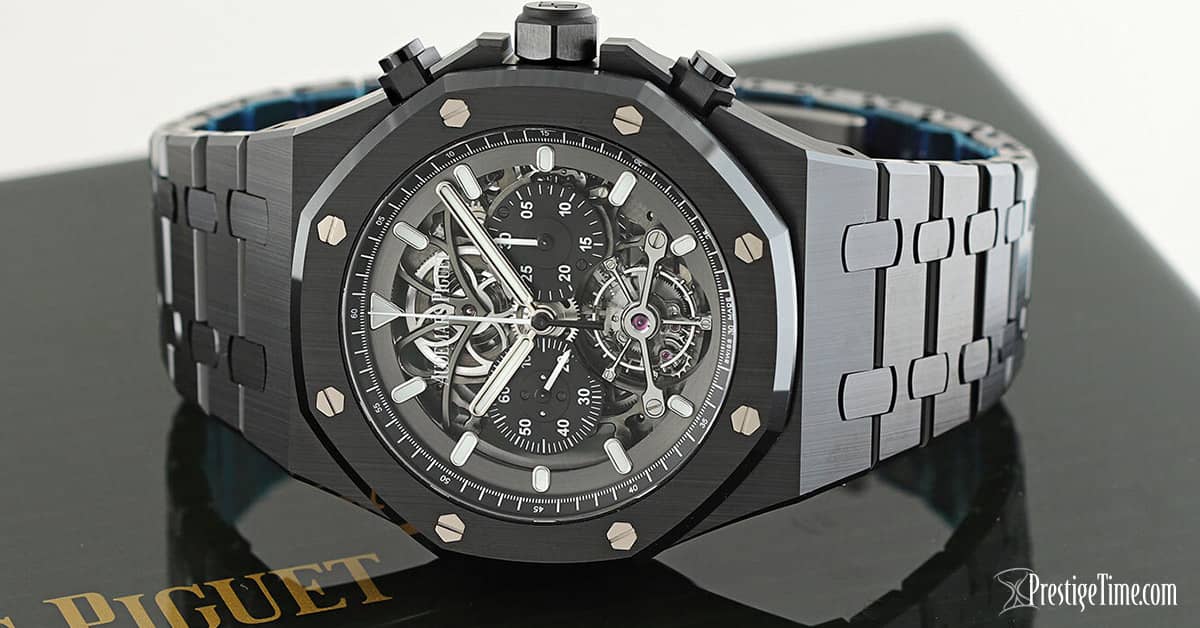 Black sub-dials appear to just float in thin air on the dial. The one at the 3 o’clock position is a 30-minute counter used by the chronograph stopwatch function. The other is a small running second's sub-register and is at the 9 o’clock position. The other hands excluding the small running second's hand, meaning the 30-minute counter hand and black and white large central seconds hand are used by the chronograph for its timing function. The dial flange around the outskirts of the dial is black and has a white finely printed second's and split second's track for precise timing. 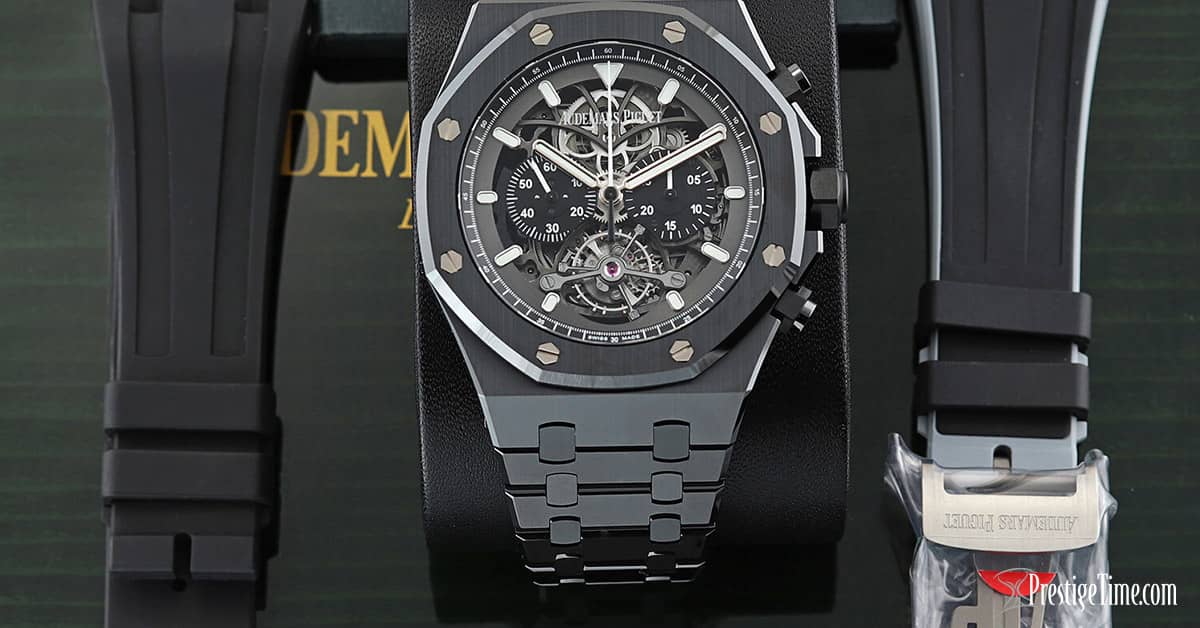 The whole skeleton dial, when looking at it in normal lighting, monochromatic with only a few small flashes of red used in the watch jewels found in the tourbillon and its cage. This matches perfectly with the black ceramic bracelet and even the two additional sporty rubber straps that are included with the watch. One is solid black rubber while the other is black rubber with grey sides. The bracelet includes an extra single set of black ceramic lug links, a titanium AP style deployant (folding) buckle.

The Audemars Piguet Royal Oak Tourbillon Chronograph Openworked watch featured here is model # 26343ce.oo.1247ce.01. It is powered by the manual wind (hand-wound), in-house Audemars Piguet caliber 2936 which is a 28-jewel 3Hz movement beating at 21,600 VpH with a power reserve of approximately 72 hours. 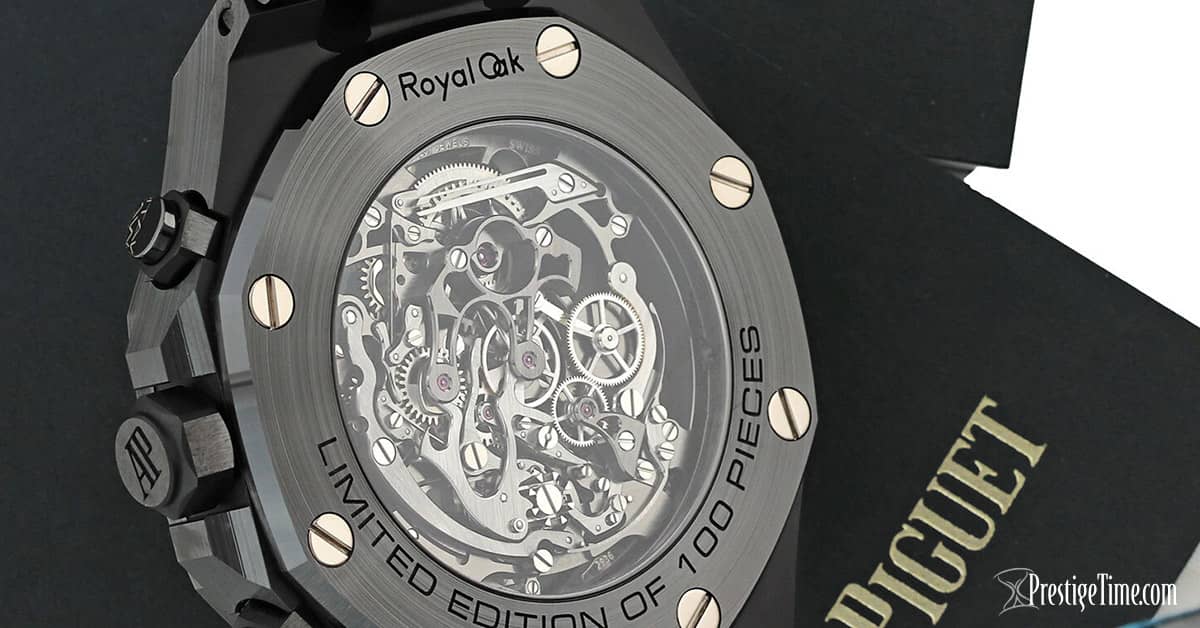