Some things are just classic while others only get better with time.

From the very same series as the first dive watch that Blancpain produced, the Fifty Fathoms diver’s watch comes a new watch with some impressive features. Namely, the addition of the tourbillon complication which compensates for the drag takes place on the movement of the watch but that’s not all that’s changed. Read further to see everything this watch has to offer.

When the first Blancpain dive watch was introduced, it was because of a request by Captain Bob Maloubier which was a WW2-era secret agent working for a diving combat unit in the French military. At the time, the watch was only water-resistant up to 10bar/100m or 300ft which happens to be how the series got its name; a depth of fifty fathoms is equal to a depth of 300 feet.

The Blancpain Fifty Fathoms Tourbillon 8 Days being reviewed here today is certainly a few steps up from the very first fifty fathoms watch ever created. For starters, the water resistance rating has more than tripled with 30bar/300m/1000ft water resistance.

The case on the model featured here is made of solid 18kt rose gold with a matching screw-down crown. The uni-directional rotating bezel is crafted with a luminous scale that uses large and easy to read numerals and a diving scale. There are several other models of Blancpain Fifty Fathoms watches with Tourbillons in this series. For the sake of keeping it straight to the point, we will be mainly discussing one of two very similar models here.

A hefty luminescent diamond shape is used at the start point of the bezel as opposed to the conventional smaller center dots which can be seen on the bezels of the Fifty Fathoms Bathyscaphe and many other Blancpain dive watches. This bezel design choice is similar to the bezel marking on the Tribute to the Fifty Fathoms Aqualung.

This bezel is fitted with a protective sapphire crystal cap to protect the bezel from scratches and dings. The watch has a metallic black dial with polished rose gold hour luminescent hour markers and matching sword-shaped hands.

On the left side of the case (opposite the crown) there is an engraving of the Blancpain logo’s wordmark as can be seen in the photo below which will also give you a good idea of the 14.7mm case thickness. The dimensions of the case measure at a bold and masculine 45mm making this a nice sized watch following the growing trend of larger cased watches for men over the past decade or so. 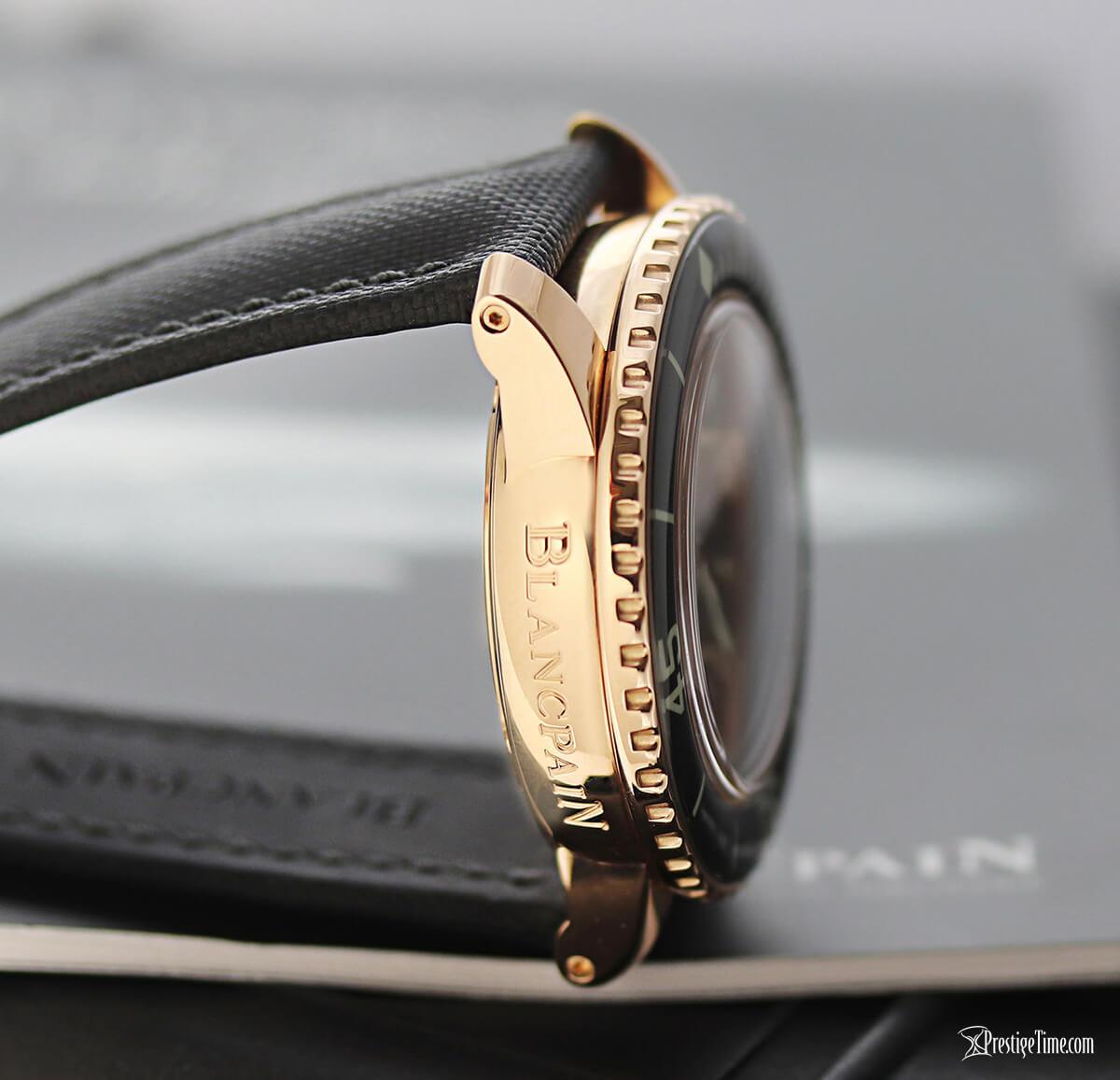 On the dial, the addition of another complication, a power reserve indicator showcases the watch’s impressive 8-day power reserve thanks to the in-house movement.

The Blancpain caliber 25a beats at 21,600 VpH making it a steady oscillation of 3Hz. The caliber 25a is composed of 223 parts and contains 29 jewels with a power reserve that lasts approximately 192 hours or 8 days.

This Blancpain manufacture 25a caliber measures 26.20mm in width and has a thickness of 4.85mm. Its plates are engraved in various places and beautifully finished with Cote-de-Genève striping and perlage; a radial circular brushed pattern.

The case is fitted to a black sailcloth canvas strap and uses a solid 18kt rose gold deployant buckle with the words Fifty Fathoms engraved on the outside of the buckle. While this is a fabric strap, it uses a weave that is quite heavy duty and has a matching tone on tone black stitching. The underside of the strap is made of smooth leather with the Blancpain logo engraved on it. 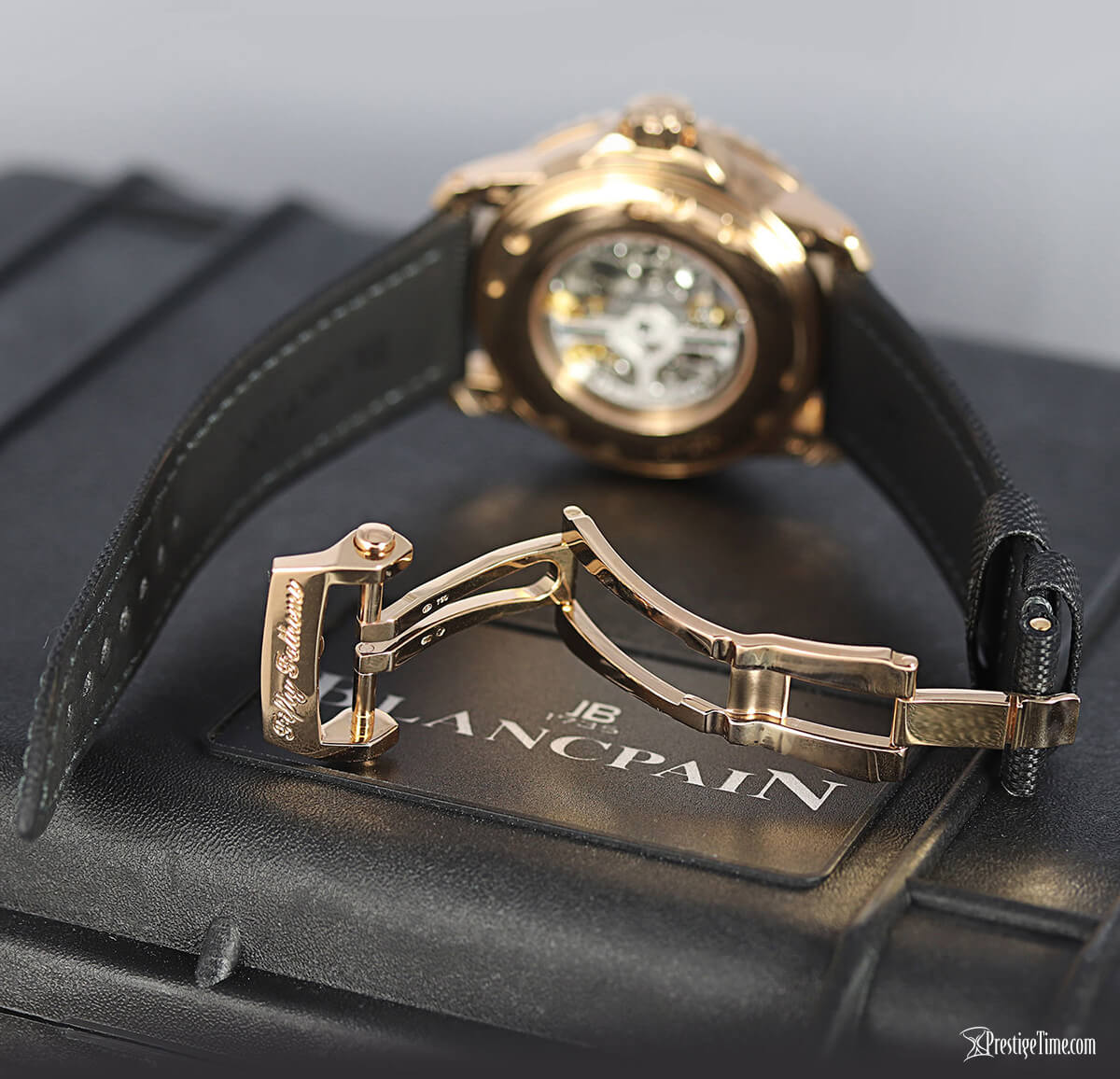 The lug width on this case is 23mm so if you choose to fit the watch with another strap such as a rubber strap, for example, you can order these online if they fit that 23mm size.

The Fifty Fathoms Tourbillon 8 Days from Blancpain comes with a water-resistant genuine Peli storage and carrying case which measures 9” x 7” x 4”. This case can be seen in the image below.

Of course, the pièce de résistance would be the very mesmerizing tourbillon complication which can be seen moving around at a steady rate at the 12 o’clock position of the dial. This little window will most likely provide to any and all spectators endless hours of horological entertainment.