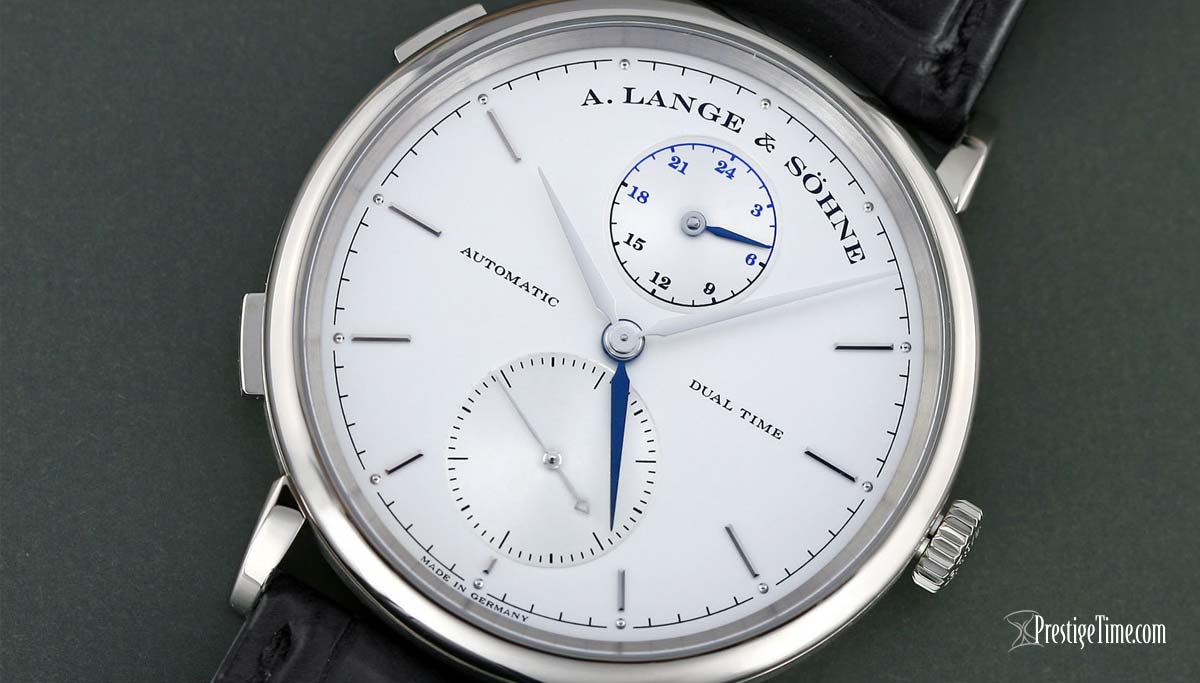 Most watch enthusiasts are on a first-name basis with A. Lange & Sohne. They are considered to be some of the most elegant watches made in the world today despite the fact that they are not made in Switzerland but instead, made in Germany.

The German Saxonian region known as Glashütte is synonymous with watchmaking, and home to only the most prestigious and exceptional German watchmakers.

Some of them include names such as Glashütte Original and the younger but up-and-coming young but full of surprises German watchmaker NOMOS Glashütte who just so happens to operate their factory across the street from the A. Lange & Sohne manufacture.

Hey, if they can pay close attention, maybe they can learn a thing or two from this master watchmaker! Without further delay, let's do our review of the A. Lange & Söhne Saxonia Dual Time, shall we?

Today we will review an A. Lange & Söhne watch known as the Saxonia Dual Time 40mm. This is a beautifully designed and impeccably crafted watch that genuinely demonstrates the watchmaker's ability to fit pragmatic complications for travelers such as a GMT/Dual Time Zone complication into a classic design all the while keeping a timeless yet up-to-the-minute look.

Perfect for a traveling person, this watch comes with a feature called a GMT also known as a Dual Time Zone complication to show the time zone in their destination city while still displaying the time from the original location.

Even the box and case looks like they are sized for a traveler. 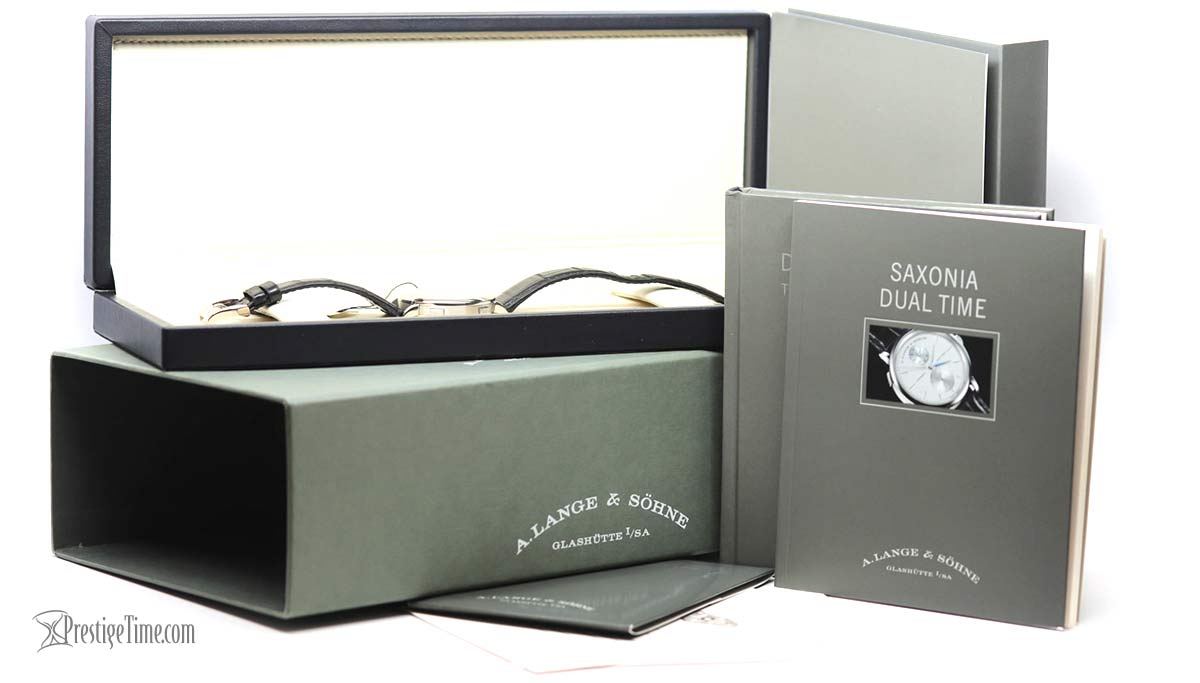 Using the two pushers on the left side of the case, a traveler can set the watch's hour hand forward or backward in one-hour intervals revealing the hidden blue central GMT / Second Time Zone hand beneath it.

An additional feature you will notice is the small sub-register just below the 12 O'clock position.

It has a small hand-made of tempered blued steel, an industrial coloring process known in Germany as ' Kornblumenblau' where they heat the metal until it reaches a high temperature that changes color to a blue hue.

Then, they polish the steel and reheat it again one last time leaving it a nice blue color.

The sub-dial at the 12 o'clock position is a 24-hour indicator which lets you know if it is AM or PM. This sub dial also works in conjunction with the central blued steel GMT hand which shows the home time. 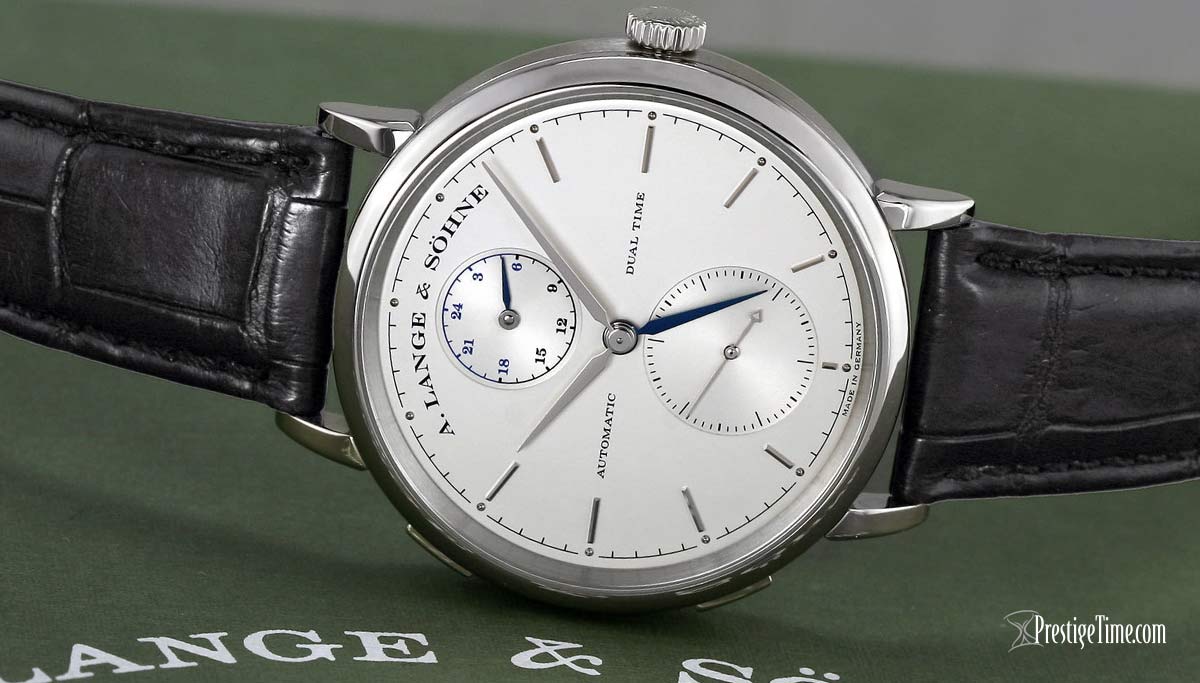 This particular model (reference #385.026) has a silver dial which has a first impression of being very visually balanced with symmetry all across the board. A reflective dot punctuates the applied baton-shaped index hour.

A printed minutes/seconds track shows four thin black lines printed between each hour marker. While this watch can do a whole lot mechanically, the design keeps the dial looking classy and classic and appearing less busy than many other GMT watches.

On the reverse side of the case, you can see German watchmaking craftsmanship at its best.

The in-house A. Lange & Sohne L086.2 automatic caliber has 268 components and is livened-up with pink rubies, and Glashutte-style blued screws on the rotor, main plate, hand-engraved balance cock and three-quarter plate.

The combination of several by-hand finishes such as Geneve stripes (also known as Côtes de Genève), Perlage (a circular graining also sometimes called perlée) and Chamfering (a high polishing technique use on beveled edges) of the various plates and screws make this in-house mechanical movement a sight to behold. 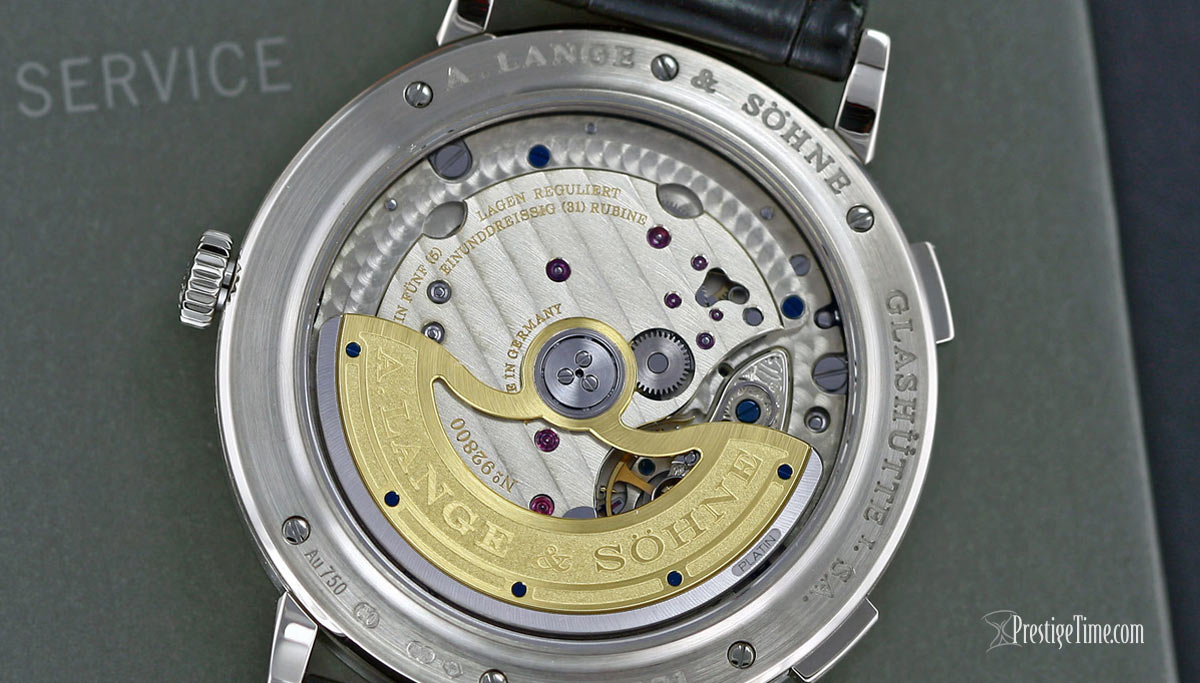 Many watch connoisseurs put A Lange and Sohne's finishing at the very top of the industry with few comparable contenders other than perhaps Vacheron Constantin, Philippe Dufour, Breguet and Patek Philippe, to name a few.

The 18kt white gold model featured here has a retail price of $33,200, and there is an 18kt rose gold version of the Saxonia Dual Time (reference # 385.032) which retails for $32,000. Use one of the buttons below to see discounted pricing options for this watch:

See comparison chart below to understand the differences between these two models. 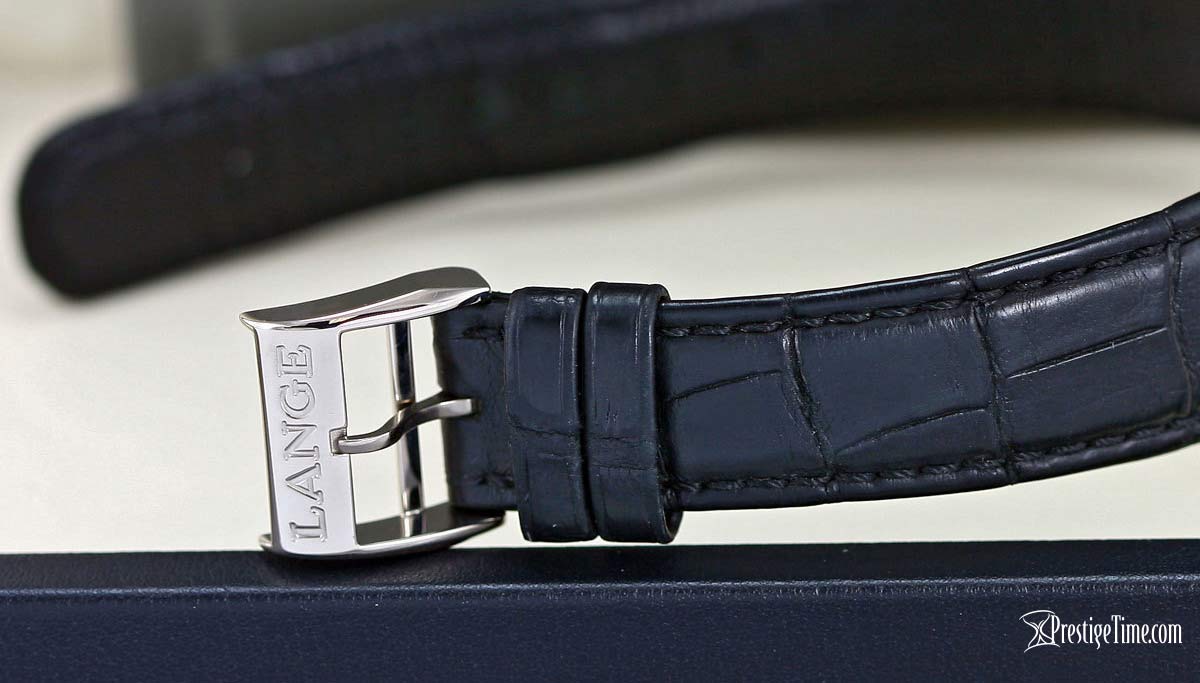