The reintroduction of a classic mid-century diver watch is always a call for celebration. Pop open a bottle of champagne and dive in for a full review of the Longines Legend Diver Automatic 42mm.

Today we will discuss in-depth the Longines Legend Diver, a reissue of the original model that was introduced in 1960 around sixty years ago. I’ve noticed a growing trend with watchmakers in the last year or so wherein which they bring back a vintage model and fit it with a new and improved mechanical movement.

HOW THE LEGEND BEGAN

There is a certain charm to a watch that has that slightly or sometimes, not-so-slightly vintage look. Many watchmakers have been acting on this. For example, Omega reintroduced a popular trilogy of their 1957 watches not long ago. That whole era in watchmaking history has tremendous appeal with collectors even today. Especially with the collectors that are in it for the horology, the types of old souls that appreciate the fascinating history and evolution of the business.

The “LLD” as it is known by some watch enthusiasts has its origins in the late 50s and early 60s, which was an era that had a certain finesse about it. This finesse was very much reflected on timepieces that were just emerging from the mid-fifties to the early sixties. 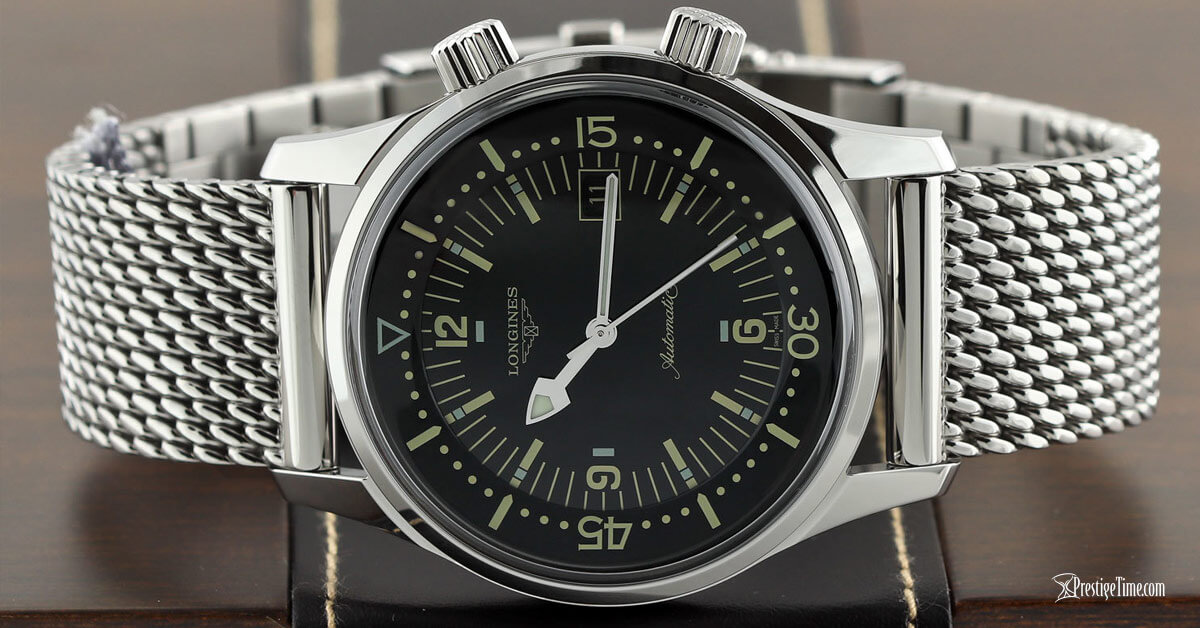 The Longines Legend Diver came to the surface only 7 years after the Blancpain Fifty Fathoms, the very first modern diving watch was introduced. This was a point where the market segment for dive watches was sizzling with excitement and the demand for diving watches was now swelling to a crescendo.

Over sixty years have passed since this watch was originally unveiled and during that time, Longines had researched ways to build on a watch that has already had a lot going for it. There have been some significant upgrades to the 2020 Longines Legend Diver collection and we will cover them all in this review. First, let's take a look at the different styles that have been made available in the Longines Legend Diver 2020 series.

Some models have a stainless-steel mesh bracelet like the model featured here. Other models have a fabric strap, and there are also models that come on a rubber strap, each equipped with a new caliber under the hood.

There two models that come on a steel bracelet are both cosmetically identical but have different movements that power them. The one featured here is model # L3.674.4.50.6 (AKA L36744506) which comes with s hardcover book titled: The Longines Sport Legends Collection, The Book of Exploits.

The watch is fastened to the wrist by a steel folding clasp with a safety latch and is powered by the Longines caliber L633. This caliber is an ébauche movement based on the dependable 25-jewel ETA 2824-2 caliber. It beats at a steady 28,800 VPH / 4Hz and has a power reserve of 38 hours. 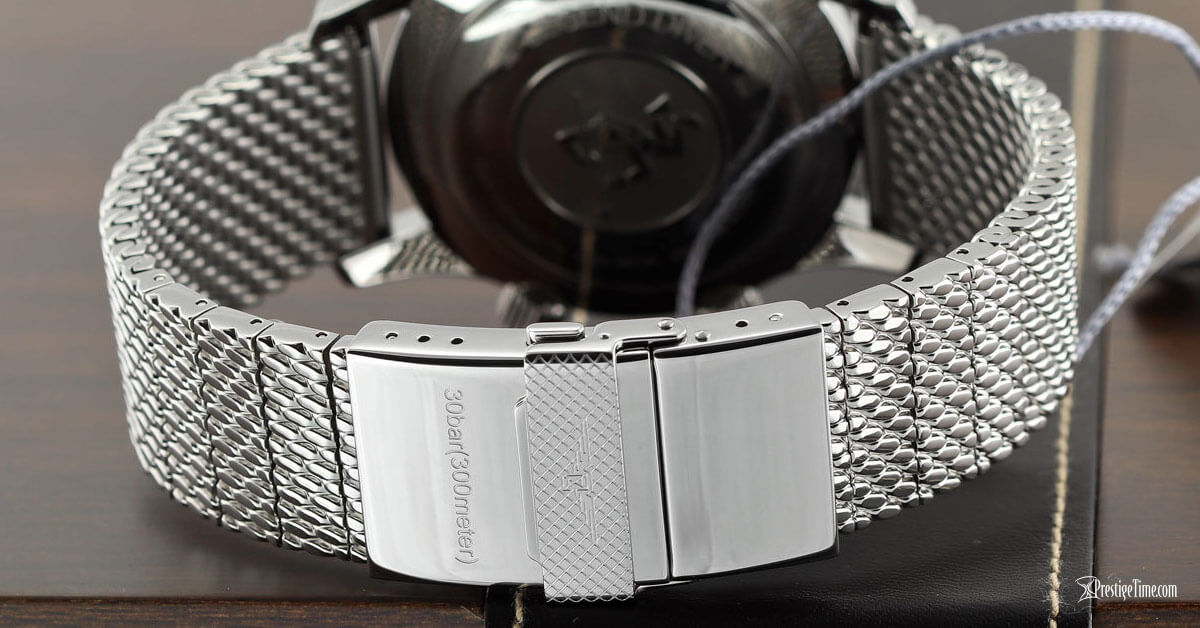 The other steel bracelet model (reference # L3.774.4.50.6 (AKA L37744506) is fastened to the wrist by a push-button folding clasp and has a different caliber, the 21-jewel Longines L888 which is based on the ETA A31.L01 caliber. This movement beats at a slightly lower rate of 25,200 making it a 3.5Hz watch movement but on a full wind, outperforms the L633 significantly with a longer power reserve of about 65 hours. Other models that use this longer-lasting movement include:

The case on this watch is 42mm in diameter and constructed of solid stainless steel with it has a lovely polished finish. Curved lugs extend on either side of the case to help conform to the shape of your wrist. Dual-crowns on the right side of the case have a ribbed texture on the sides and a checkered pattern on the tips. This makes thee crown easier to grip. a slight bezel is seen contouring the sapphire crystal. The addition of the sapphire crystal is one of the numerous improvements on the re-issue of the Longines Legend Diver watch. 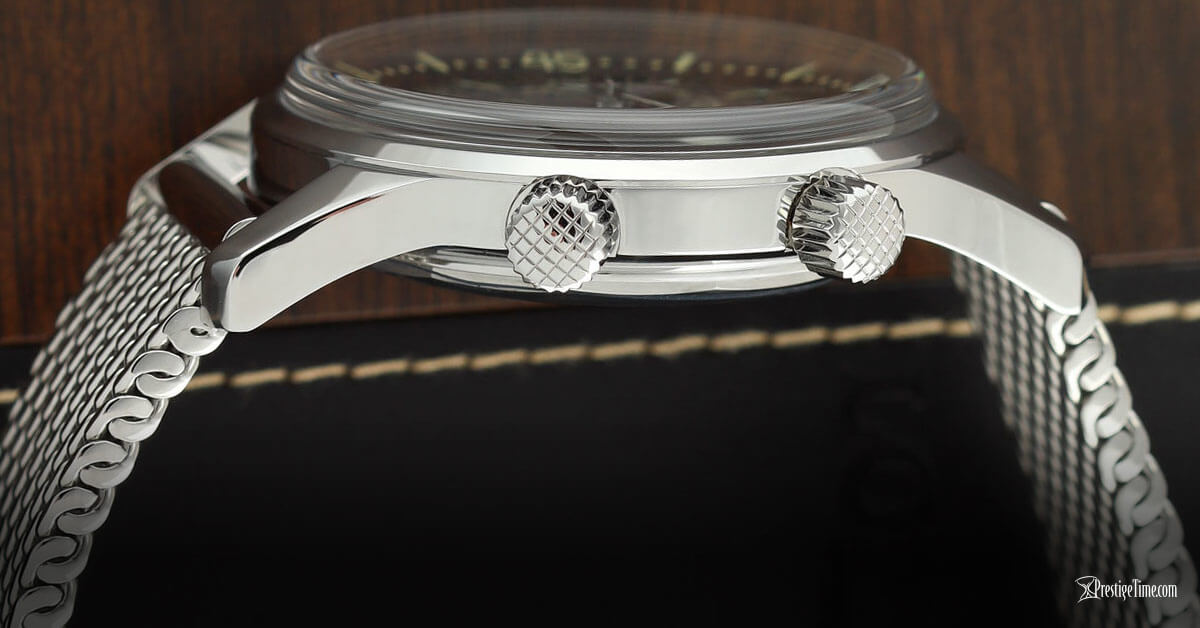 Another thing that impresses me about the watches in this series is the bi-directional rotating bezel which is positioned on the inside of the dial behind the newly added scratch-resistant sapphire crystal. The bezel has a glow-in-the-dark downward pointing triangle to indicate the bezel’s start point, and the index hour markers on the inside of the dial are punctuated with a small luminous square. Arabic numerals are used to mark the 12, 6, and 9 o’clock positions and are marked with a long line that is made of luminous material. The 12 o’clock numeral displays this luminous line as an underline beneath the numeral, the 6 o’clock numeral has the line above the numeral, and the 9 o’clock numeral displays this luminous line to the right.

Put your mouse cursor over the image below to turn the lights off on the image and see the luminous material in action. 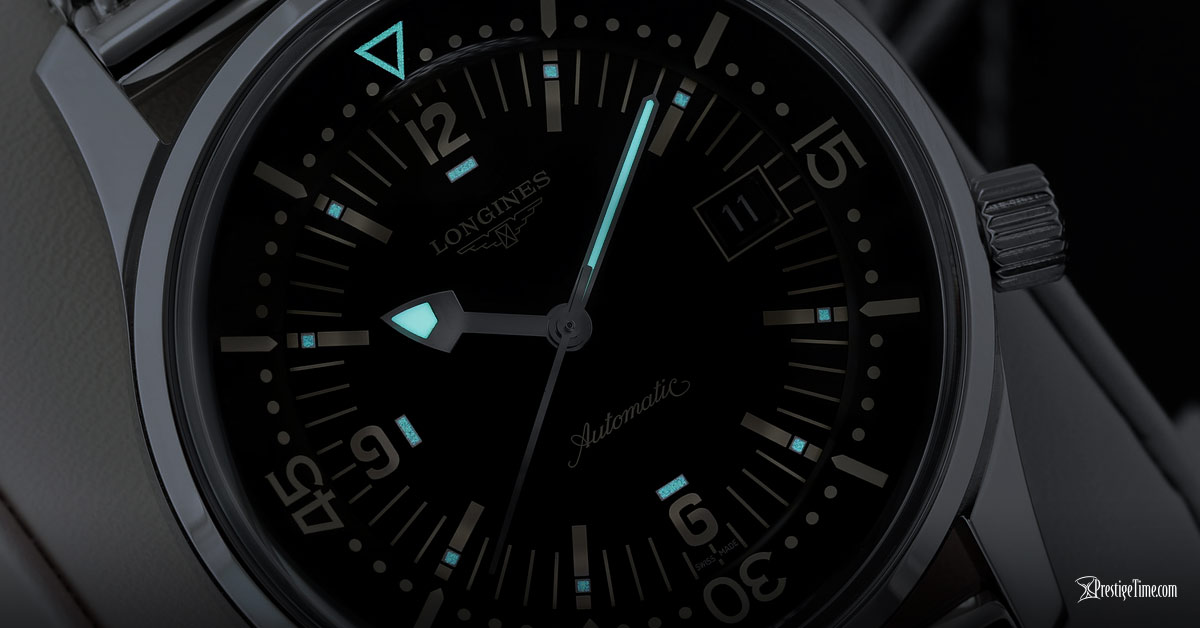 A finely printed index-style second track is on the inner dial. The bezel which is on the perimeter of the dial uses a combination of Arabic numerals, sword-shaped indices, and dots. You'll also notice a date window at the 3 o'clock position with a finely printed border.

Regardless of the model, you choose you will receive a quality dive watch with an impressive 300m/1000ft water resistance rating. The new Longines Legend Diver series has a solid case back depicting a professional diver holding what appears to be a spear or most likely a harpoon. 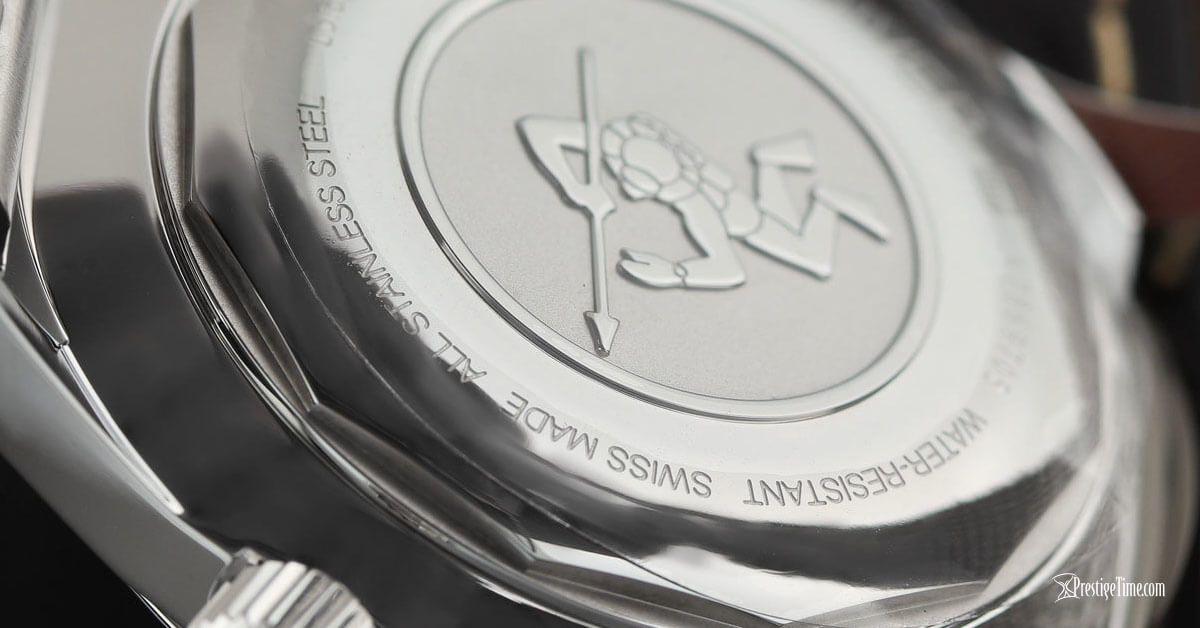 Additional features include screw-down crowns and screw-down solid steel case backs contribute to the higher than average water resistance rating. The features that this watch offers come at a surprisingly affordable price point which will surely make you smile. To browse watches in this series, click on the button below.