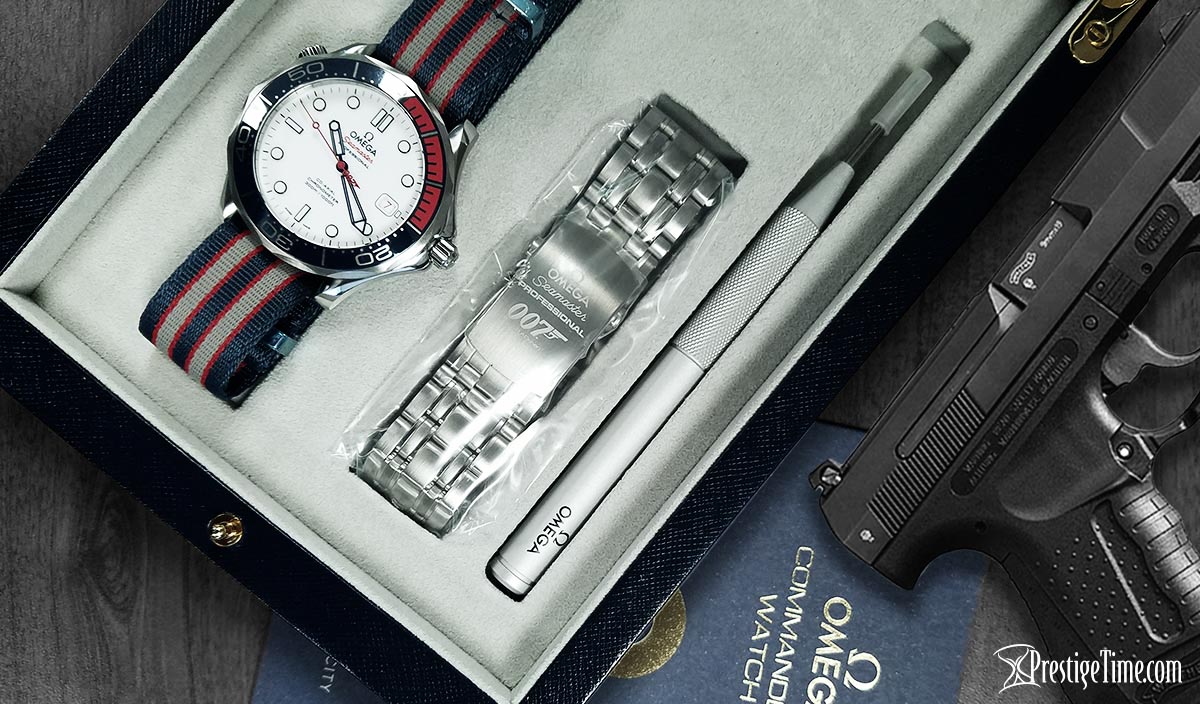 The colors of a top-secret agent and statesman shine forth on the new Omega Seamaster Professional Diver 300m Co-Axial Automatic. The new 41mm chronometer seems to take some design inspiration from Omega's previous James Bond Limited Edition, the Spectre (which had a monochromatic gray and black striped NATO strap. This new James Bond watch comes to life with a more colorful red, gray, and navy blue striped NATO fabric strap with the colors of the Royal Navy along the strap and stately bezel. 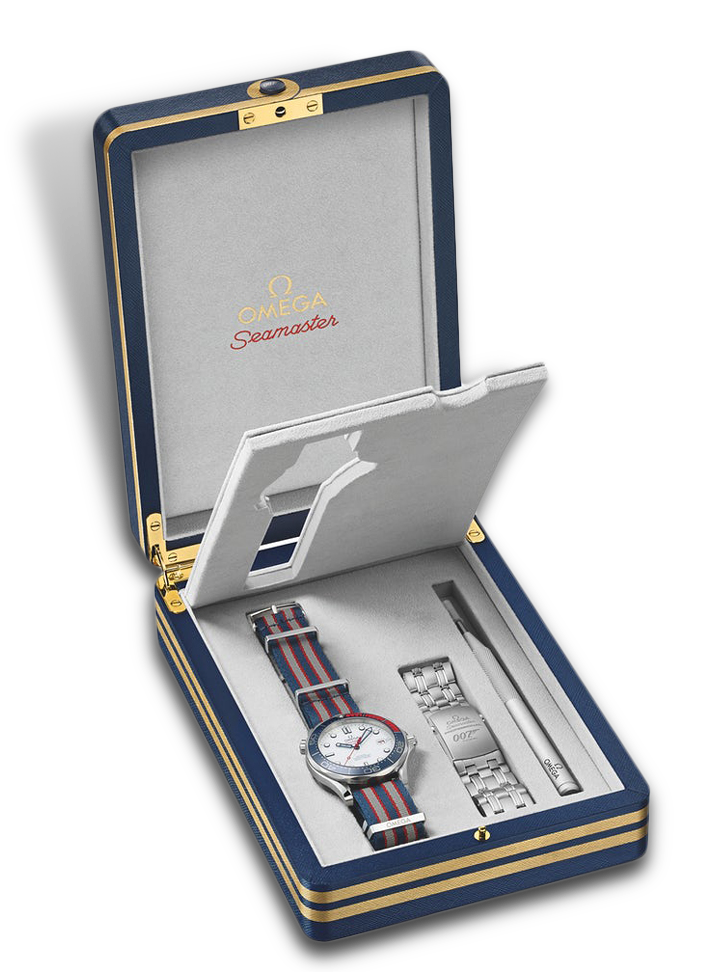 The Omega Commander watch also has a brushed stainless steel bracelet with the 007 logo branded on the push-button deployant clasp.

If you love Omega watches as much as I do, you'll also be happy to receive the Omega branded tool and instructions on how to remove and change the bracelet or strap.

The packaging is also something worthy of a royal salute with a 007 branded button to open the blue and gold Omega Commander's Watch box.

Bezel: Brushed steel with a navy blue ceramic fill that has a red 15-minute scale. Satin-finished numbers and indexes in steel wrap all around the bezel with indexes and dot minute markers. The unidirectional rotating bezel also has a great shape for gripping giving you extra traction.

Case: Brushed steel case has the words "COMMANDER'S WATCH" written above the transparent sapphire crystal on the case back with the words "LIMITED NUMBER / 7007 EDITION". The crown and lugs are polished and brushed.

Hands: The hands on the Commander's Watch are very 007 with the skeletonized luminescent navy blue hour and minute hands and a red second hand that has a luminescent dot on one side and the iconic James Bond 007 Gun Logo as a counterweight on the other end of the second hand.

Dial: The white ceramic dial has great contrast and is easy to read with its blue indexes and minute track. Luminescent hour markers and a date window at the 3 o'clock position which shows the date in red. The dial is covered by a slightly domed sapphire crystal.

Water Resistance: Like all James Bond watches, this one is no different and is designed to get wet. The Omega Seamaster Pro model # 212.32.41.20.04.001 is equipped with 300m/100ft water resistance so that if you're doing a little role play and sky diving from a burning helicopter while landing in the Thames with a splash; it should be of no consequence to your watch.

If you are into serious underwater adventures, like as those that call for a professional diving bell, the Omega Commander's watch is equipped with a helium escapement valve at the 10 o'clock position on the case. This helps to release any tiny microscopic molecules of helium that can penetrate the crystal while using a diving bell. Once on dry land, the helium escape valve is pushed to release said helium. 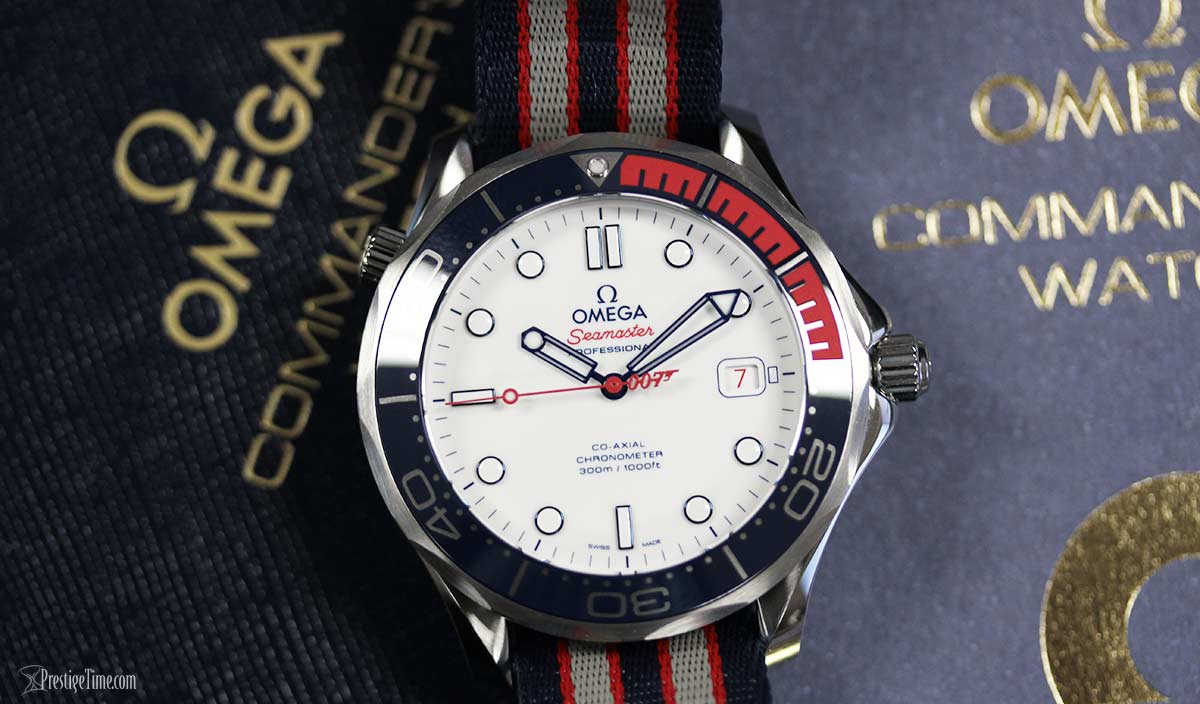 About the Movement: The 27-jewel Omega Caliber 2507 beats at 25,000vph / 4Hz at hold its power for approximately 48 hours. The automatic chronometer has great accuracy and can be seen through the transparent case back. 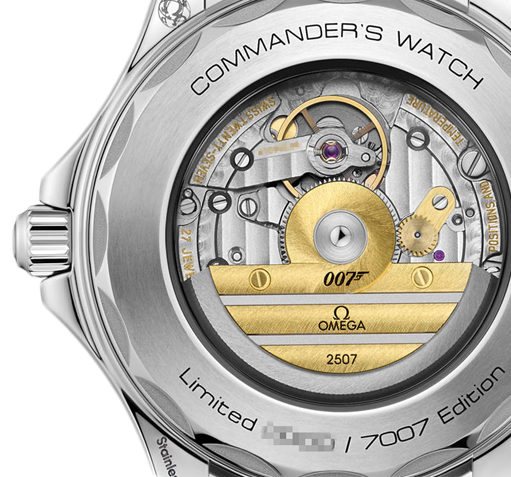 Overall this is a great looking watch that can be rather light on the wrist when using the fabric NATO strap. If you need to dress up a bit, (in dare I say a tuxedo and bow tie?) ...the brushed stainless steel bracelet comes in very handy. Pistol not included.

Now… isn't it about time for a martini? ...shaken, not stirred. 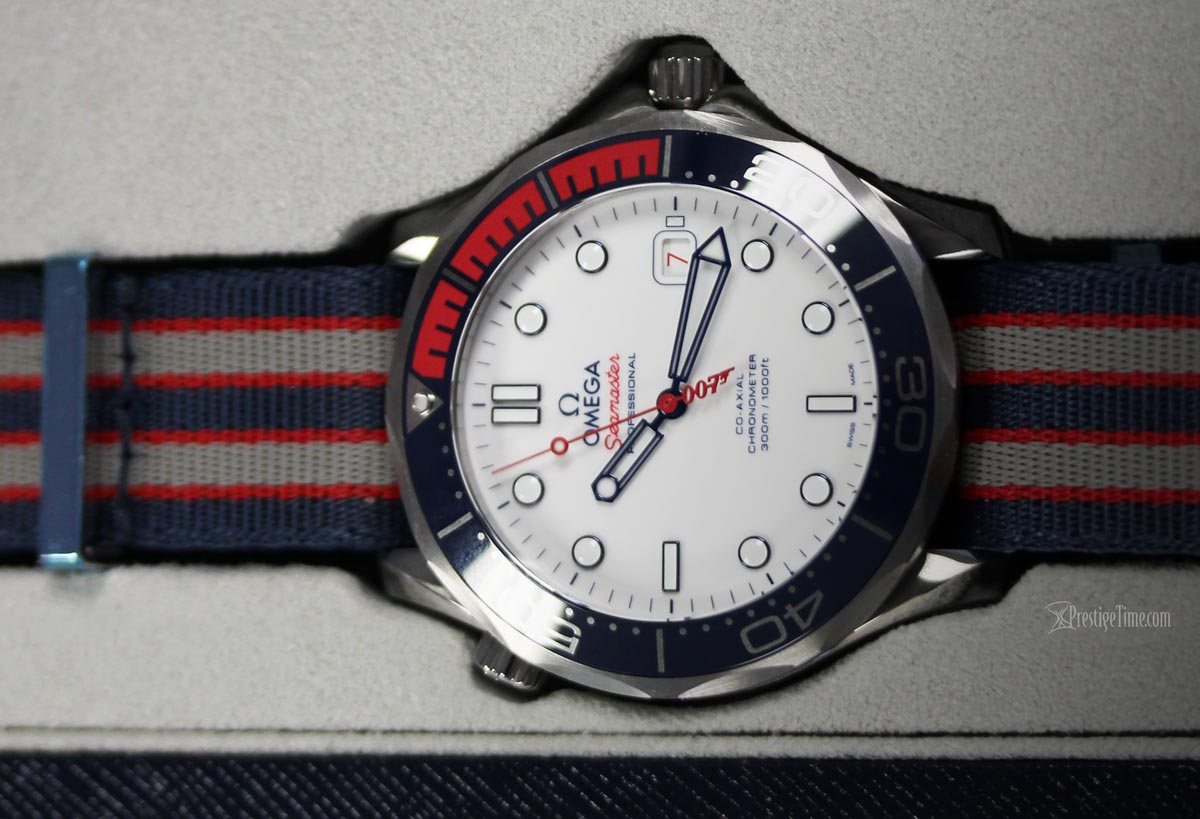