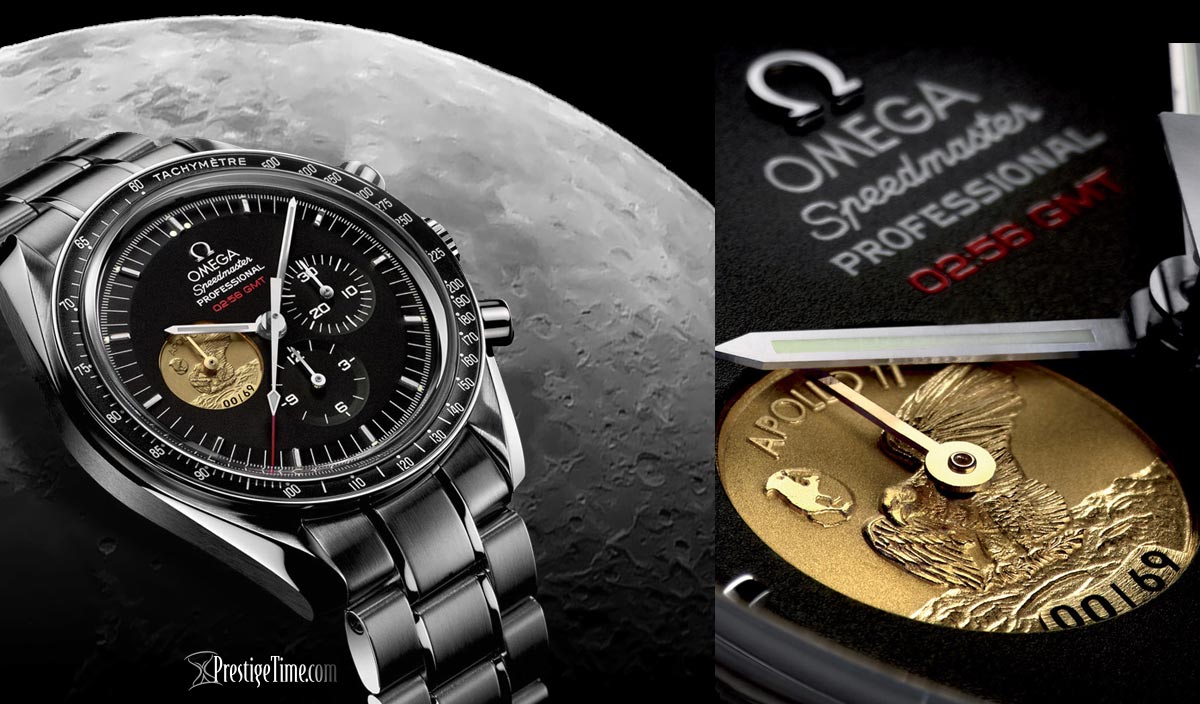 The Omega Speedmaster Moonwatch collection reveals a new side of the moon. The Dark Side of The Moon. 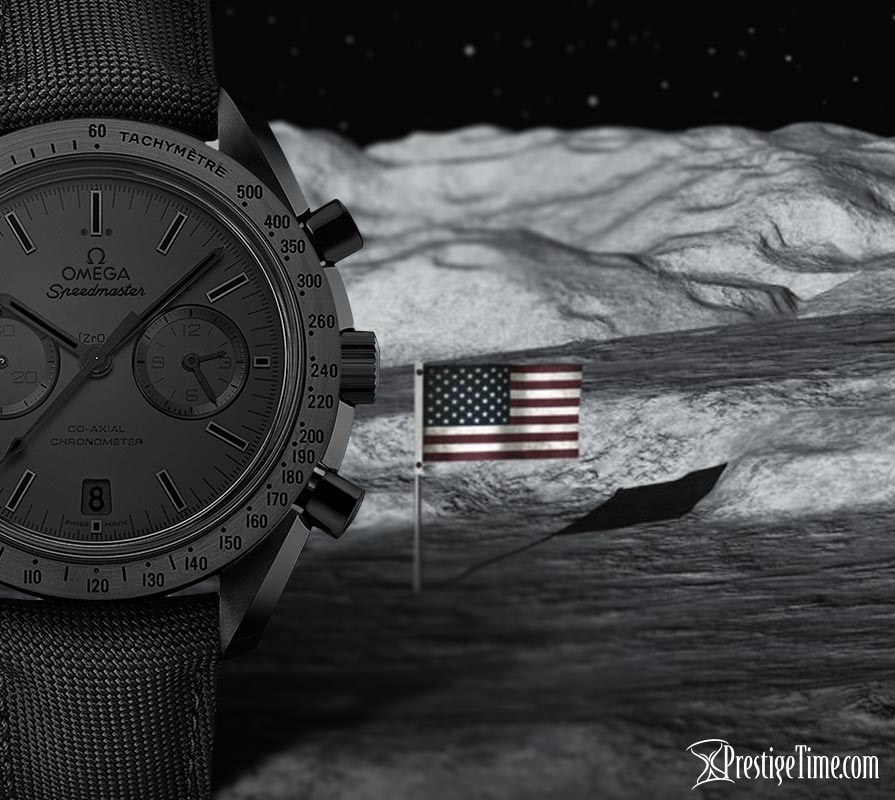 The Speedmaster Moonwatch is arguably one of the most talked-about and famous watches that Omega ever made. Still, to this day, over 50 years later, the Moonwatch is still around and going through different phases of growth and innovation.

Not everyone has an opinion on how everything happened up there, and amidst all the lunar landing controversy, the following 2 lines of transcripts are referenced from Nasa's website (for dramatic effect) the rest of the transcripts may or may not reflect how Prestige Time bloggers believe it all played out:

102:48:32 Neil Armstrong: "Yes Buzz, I get it... Very cute. Uh…You know we are on a space mission here so it would be great if you can quit clowning around and obsessing over your watch and get back to work. Over."

102:48:59 Buzz Aldrin: "Roger that. Glad you never lost your sense of humor though. I think someone back in Houston filled one of my oxygen tanks with nitrous oxide. I've been pranking a few of our colleagues and I think they waited for the best moment for payback. Over."

102:49:29 Neil Armstrong: "What goes around comes around. I guess you kind of had that coming. One thing I got to say is that if our Lunar module didn't malfunction and I didn't have to leave my watch in the Lunar Module and the Omega Speedmaster Moonwatch for backup, we'd both be wearing watches right about now. Over."

102:49:40 Buzz Aldrin: "At least now I can say that my Omega Speedmaster was the first watch worn on the moon."

102:49:28 Neil Armstrong: "Good for your watch! You forget that I was still the first man to walk on the surface of the moon. I think that makes better news headlines. Over."

102:51:19 Buzz Aldrin: "Fine! (Buzz is still laughing while starting the stopwatch on the Speedmaster chronograph) You kind of set me up for that one, Commander. Hey did I ever tell you that my mom's maiden name was Marion Moon? Over."

102:51:25 Neil Armstrong: "No you didn't, but one more wisecrack about your moon watch and you can ask mommy moon to call you a lunar-Uber to take you home. Over."

102:52:02 Neil Armstrong: "Say, when you start getting enough oxygen again, maybe you can help me stick our flag into the ground. (Neil chuckles) Get it? Stick? ....Over."

While much of the above banter is satire and fictitious, Neil Armstrong's watch was actually left in the lunar module as a backup when the module malfunctioned and in turn, Buzz Aldrin had the honor of wearing the first watch while walking on the moon's surface, the Omega Speedmaster Moonwatch, thereafter known as the Omega Moon Watch.

One of the things that remained very consistent from the 1960s until today is that the Moonwatch ran on a manual wind (hand-wound) mechanical movement. Most likely, Neil and Buzz had to remove their big puffy astronaut gloves to wind up their Moonwatches. Since then the Moonwatch had several different mechanical calibers running them.

It's important to note that there are two classes of the Speedmaster Moonwatch.

There is the Speedmaster Moonwatch Co-Axial that is powered by the Caliber 9300. It features a 60-hour power reserve and contains 54 jewels and comes with a COSC certification and the prestigious designation of Chronometer, an attestation to its high precision.

Then there is the  Omega Speedmaster Professional Moonwatch where the newer models run on the Caliber 3861, a movement that now comes with both a COSC certification and a METAS certification and of course, the prestigious and coveted Master Chronometer designation, an attestation to its high precision and resistance to water and electromagnetic interference.

This watchmaker has been slowly and steadily adding specific features to their entire collection over the last decade. It started with the Co-Axial escapement that promised to allow for a longer period in between regular servicing and maintenance. Then they introduced the Master Chronometer designation that is conveniently only available on their watches thanks to the rigorous testing done at the METAS (Switzerland's Federal Institute of Metrology). Having the Master Chronometer designation means that the watch has to be accurate within higher than COSC specifications and precise within a deviation of no greater than -0/+5 seconds per day. This is considered excellent precision in mechanical watchmaking.

Regardless of what Moonwatch you choose, it will be one of your prized watches in your collection. 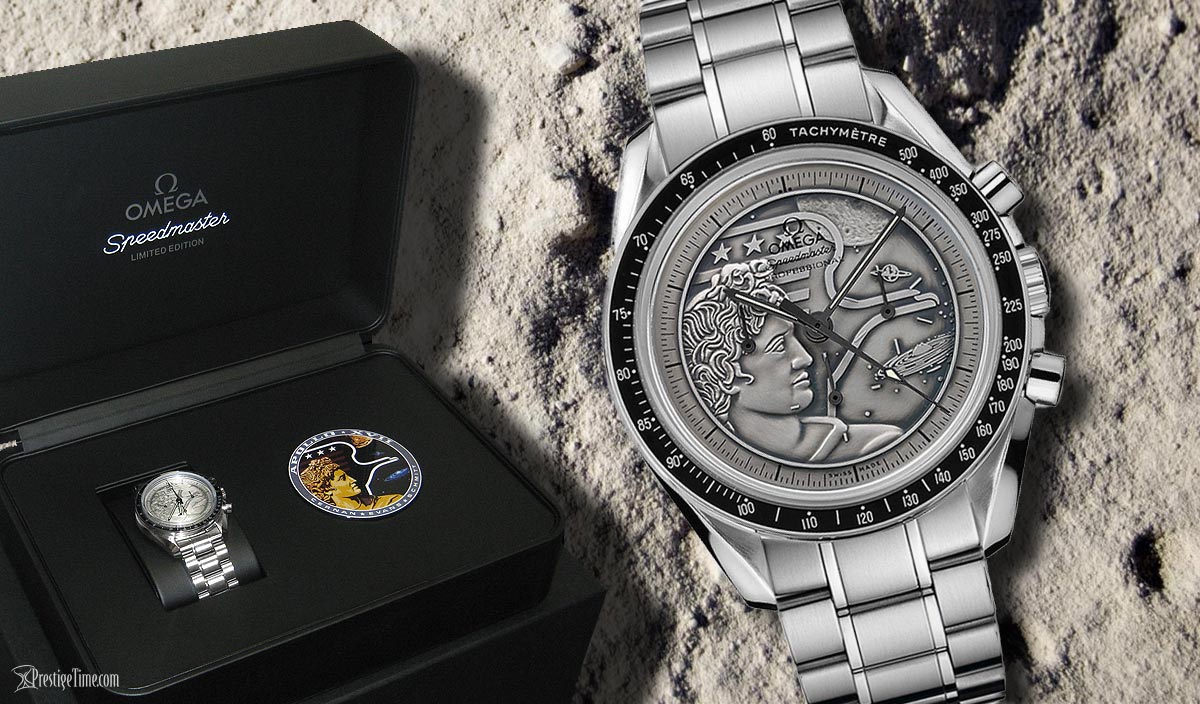