The Omega Seamaster and the IWC Aquatimer offer very competitive features but how do they differ from one another? Find out how in this detailed comparison.

What’s the difference between the IWC Aquatimer and the Omega Seamaster?

These two brands are often compared to one another. They both have an excellent reputation and are well-respected brands in the watch industry. So, let’s take a close look at two of their diver watches, the Omega Seamaster and the IWC Aquatimer to see how they compare to one another but also to discover what exactly makes them different.

For starters, let’s talk about size. These days, the growing trend with watch design is a larger watch case. This means in width and height but not thickness. Watchmakers are often striving to make feature-rich watches with thinner cases.

What is the size difference between the Omega Seamaster and the IWC Aquatimer?

The most popular Seamaster would be the Omega Seamaster Diver 300m Co-Axial which was most recently in 2018 redesigned. The models that predated 2018 were had a 41mm case with a thickness of 13mm. The new 2018 Seamaster Diver Co-Axial Master Chronometer has a 42mm case size with a 13.5mm case thickness. 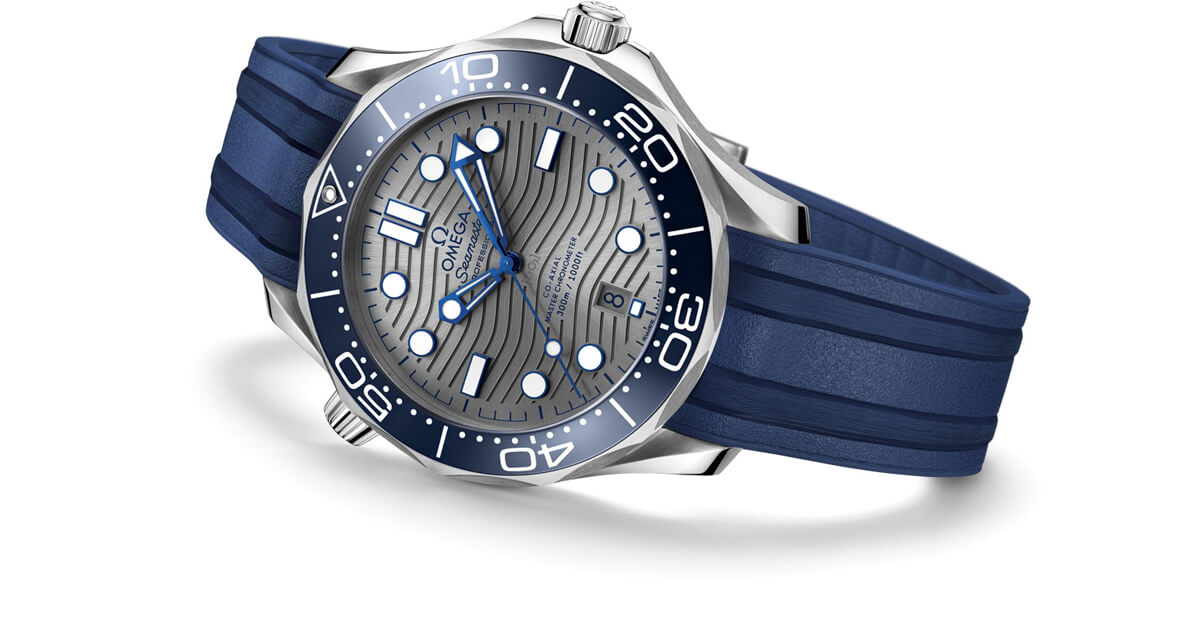 The new 2018 Omega Seamaster 300m features a transparent sapphire crystal case back which allows you to see the movement in action. The IWC Aquatimer, on the other hand, has a solid stainless steel case back and doesn’t let you see the movement on the back of the watch’s case.

The IWC Aquatimer has a few models in the series which have different sizes. The entry-level is a 42mm watch with a 14mm case thickness. Some of the larger Aquatimer watches such as the Aquatimer Chronograph features a 44mm case with a 17mm case thickness. If you’re looking for comfort the Seamaster will probably take up less space on the wrist and will likely hide away under a sleeve easier since it has a slightly thinner profile.

While the size of the Aquatimer 42mm is only a 1mm difference from the Seamaster, on the models of the Aquatimer that carry a silver dial, they appear to wear like a larger watch since the dial and steel bezel appear like one continuous color. Contrast plays a role in the appearance of size and the models that have a black or blue dial with a stainless-steel case don’t have this visual effect.

Which has better water resistance, the Aquatimer or the Seamaster?

Both have up to 300m/1000ft of water resistance. This includes both the Aquatimer Automatic Chronograph and the Omega Seamaster 300m Diver Co-Axial Chronograph.

One feature that the Omega Seamaster 300 has that the IWC doesn’t have is the Helium Escape Valve this is made to be used released the build-up of tiny Helium molecules that squeeze into the watch. This usually occurs when a diving professional will use a diving bell and is breathing from a tank with a gas mix such as Trimix which contains helium.

A Helium atom is the smallest found in nature and this valve allows the Helium build-up to be released upon resurfacing and decompression. This mechanism was originally created by Rolex and Doxa in the 1960s and is not found on every diving watch but you will find them on some of the best dive watches.

How do the movements of the IWC Aquatimer and the Omega Seamaster compare?

Both watches have a mechanical self-winding movement also known as an automatic movement. 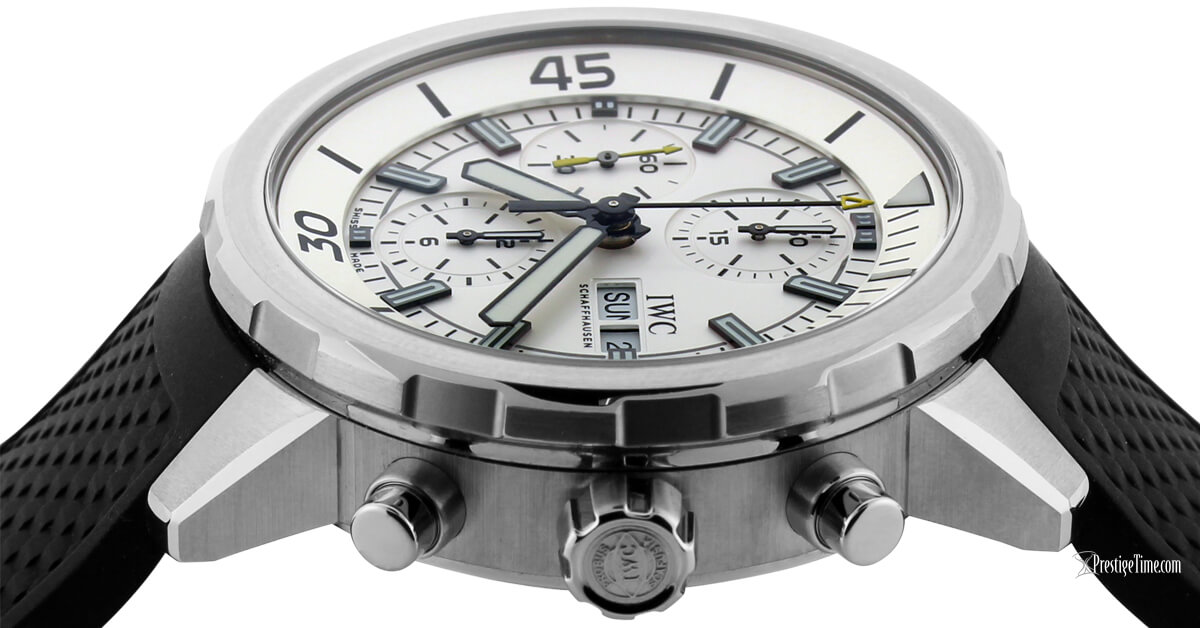 The 2018 Seamaster Diver 300 watches are using some innovative components in their movements. For example, the Omega caliber 8800 and 8806 movements still carry forward Omega’s Co-Axial escapement which was used in many of the previous models which carried the 2500d caliber. It’s predecessor, the Omega caliber 2500 didn’t have the Co-Axial escapement.

This feature had since become a standard in all Omega watches. It contributes to the stability and durability and accuracy of the watch by using less friction and therefore less lubrication. As a result, the periods in between regular servicing intervals are longer which extends the lifetime of the watch.

The new Seamaster Diver 300 Co-Axial Master Chronometer watches have a few more features that are certainly worth mentioning. For starters, they use the Si14 silicon balance spring which is impervious to electromagnetic waves. Usually, things like electronics would give off an EMF causing the springs in a mechanical watch to magnetize which resulted in issues with accuracy.  The Si14 spring prevents that.

Additionally, they now have the new designation of Master Chronometer which means that after the caliber was rigorously tested by COSC and received a COSC certificate attesting to its accuracy in real-life situations, they go for another round of testing and fine-tuning with another lab called METAS. There, they will be tested for water resistance, accuracy, and magnetic exposure greater than 15,000 gauss.

When they pass all the testing at METAS they receive a second designation of Master Chronometer. So far, Omega is the only watch that has received this second designation which attests to even superior accuracy than a COSC certificate. The Omega 8800 caliber that is found in the 2018 Seamaster watches can be seen through the now transparent sapphire crystal case back which displays the beautifully finished movement.

Which has a better bezel, the IWC Aquatimer or the Omega Seamaster?

The Omega Seamaster Diver 300m uses stainless steel, ceramic-filled bezels that are highly scratch resistant and unaffected by the color fading nature of UV light exposure. The Seamaster has a uni-directional rotating bezel which makes a bit of a ratcheting sound when rotated. The bezel has a luminous dot at the start position. The newer 2018 Seamaster models also feature a white ceramic diving scale and the models that preceded these had satin-finished diving scale on the bezel.

How does the IWC Aquatimer’s bezel work?

IWC Aquatimers are fitted with a unique bezel with the IWC SAFEDIVE SYSTEM. It is also a uni-directional rotating bezel like the Seamaster but with a twist.

There is a sliding clutch system that enables this feature. This sliding clutch is located at the 9 o’clock position on the side of the case and is secured by a protective shield. While this protective cover is found on the Aquatimer Automatic watches since 2014 when they re-invented it, earlier models didn’t have this on the case.

What type of watch band is on the Omega Seamaster? However, the Omega Seamaster does have a few more options in terms of how the watch is fastened to your wrist. The Seamaster Diver 300m collection offers models that come on a black or blue rubber strap, some models come on a stainless-steel bracelet with a push-button folding clasp and a built-in dive extension allowing you to expand the bracelet to fit over the sleeve of a professional wetsuit. There are also a few models that come on leather straps or even a striped fabric strap known as a NATO strap.

There are are also certain factors to consider when trying to choose between two watches or even two watch brands. The warranty period is one of them for any high-ticket item purchase and although some consumers don't mind having a shorter warranty period, it can be a deciding factor for others. That said, Omega offers a 5-year warranty period while IWC only offers a 2-year warranty. However, that is the out of the box warranty from IWC. As of Nov 19th, 2019,  IWC announced that they will be extending the warranty period from 2 years to 8 years when registering IWC's international limited warranty online in the MY IWC program.  They also honor this extended warranty period on any watch bought within the past two years.

Should I buy an Omegas Seamaster or an IWC Aquatimer? If you find yourself asking this question you should know that both IWC and Omega make great diving watches. Each has certain features that are unique from its counterpart. Omega has more accurate mechanical movements that are precise and are magnetic resistant up to and over 15,000 gauss. The Seamaster Diver 300m has a very distinct modern look that was popularized after being featured on the wrist of James Bond in the 007 movies over the last two decades.

Is the IWC aquatimer a good watch? The IWC dive watch has a more classic look and has a larger and slightly thicker case than the Seamaster it uses a movement that uses a Sellita base caliber which although modified by IWC, it is still unquestionably inferior to the Omega’s Master Chronometer caliber in terms of precision and would never fall within specs of a COSC Chronometer let alone a METAS Master Chronometer.

They are both water-resistant up to 300m/1000ft but only the Omega has a METAS certificate which attests to the fact that a third-party did the testing on the water-resistance to validate that the watch can handle that kind of underwater pressure.

Additionally, the Omega has a Helium escape valve which the IWC does not. It seems like the Omega adds more value at their slightly lower price point and offers more impressive features for divers such as the helium escape valve and more enjoyable features for watch enthusiasts such as a transparent sapphire case back which allows you to see the movement in action through the back of the case.

Then again there are those that hold IWC on a higher pedestal than Omega in terms of horology since they also manufacture watches with high complications such as a perpetual calendar. Both watches look quite different from one another and in the end, you need to gauge what is more valuable to you; impressing watch collectors or impressing professional divers. It usually just all boils down to personal taste and preference.

To see how IWC and Omega compare as brands click here.

To browse both the Aquatimer and the Seamaster collections click on the buttons below. 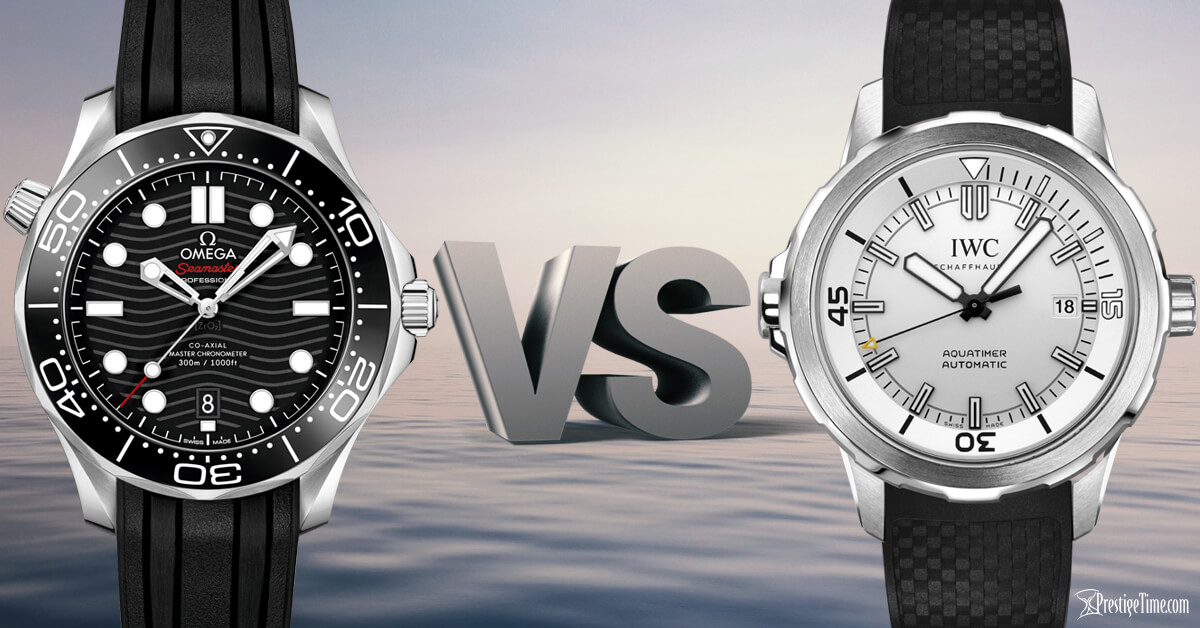