One of mankind’s greatest achievements is celebrated with the creation of a new limited-edition chronograph.

A certain Omega chronograph watch has been to the lunar surface not once, but six times. In doing so the Omega Speedmaster has become quite the iconic watch among collectors. There are several Apollo mission limited edition models and we’ll eventually review each of them on their own but for today, we will review model # 311.92.44.30.01.001.

Omega Speedmaster Moonwatch Apollo 8 Dark Side of The Moon Review

The first thing about this watch that will catch your eye is the striking dial with its laser-ablated lunar texture which can be seen through the skeletonized dial which accentuates the blackened caliber within.

The chronograph 30-minute sub-dial is at the 3 o’clock position with a twelve-hour counter at the 6 o’clock point and a small running seconds sub-register at the 9 o’clock. 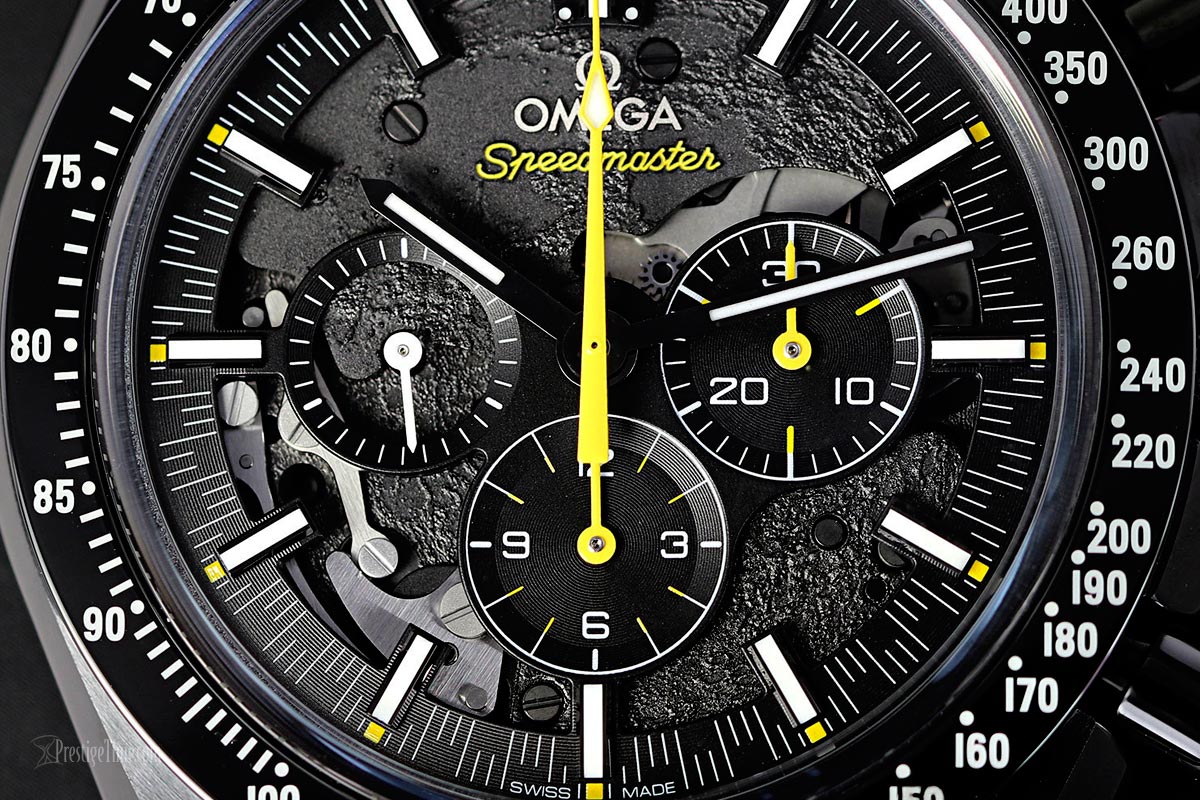 Another welcomed design element was the faint but tasteful use of yellow. You’ll find it on the chronograph hands, the tip of the hour markers, on the word Tachymètre printed on the bezel, and on the word ‘Speedmaster’ under the Omega logo on the dial. It is also found on both the stitching and the inner layer of the perforated calfskin leather strap.

The polished and brushed 44.25mm black ceramic case is 14.25mm thick and has a lug width of 21mm in case you wish to fit the watch with an aftermarket strap or bracelet. The chronograph pushers and crown are made of a polished black ceramic with a luminous Omega logo on the crown. The side of the case uses a brushed finish with a smooth polished beveled edge that tapers from the brushed lugs to the side of the case. 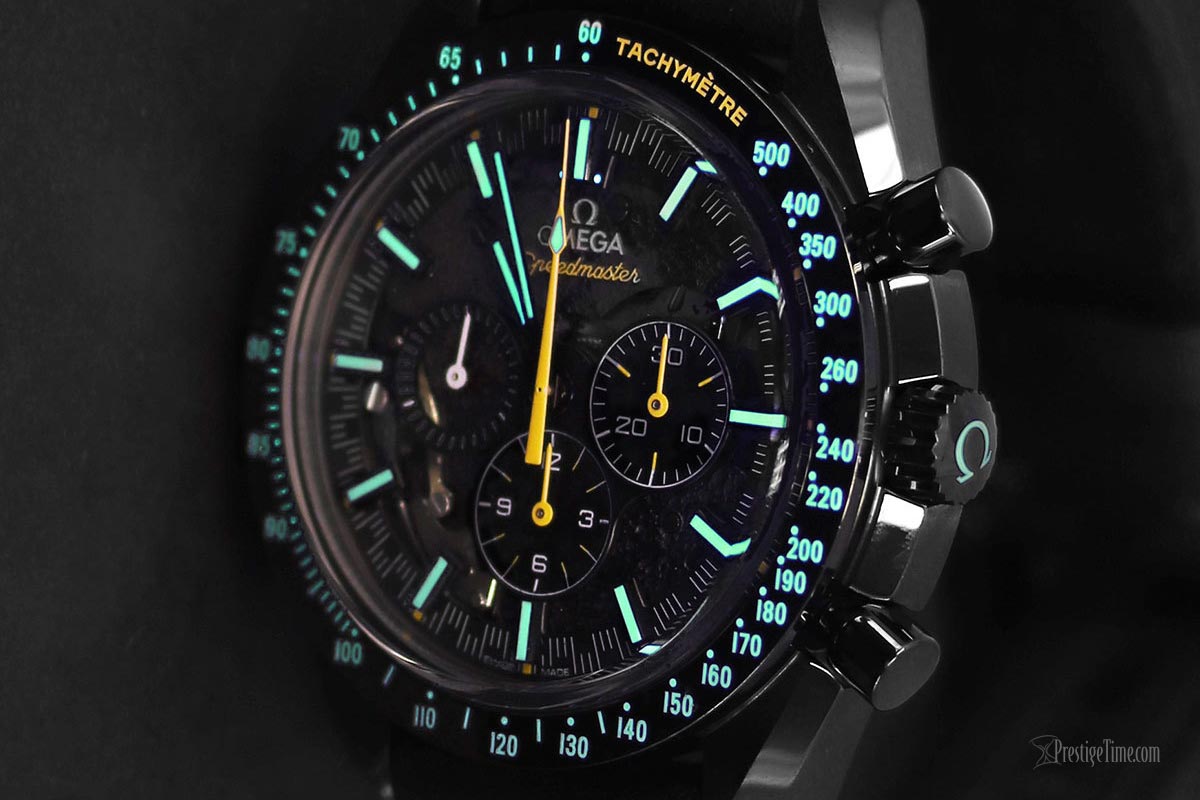 Luminous fill is also found on the tachymetric scale and hour markers, and central hands. These glow in the dark areas glow in what appears to be a mint green hue and is easy to read in low light conditions.

The reverse side of the case reveals the Omega caliber 1869 through the transparent sapphire case back. This laser-ablated plates and bridges as can be seen through the transparent case back are lunar textured as on the dial on the front of the watch. This nineteen-jewel hand-wound movement has a 48-hour power reserve and beats at 3Hz or 21,600 oscillations per hour.

The case back also features an engraved inscription of the words ‘Dark Side of The Moon’, the mission date and the historic statement made by Nasa astronaut Jim Lovell “We’ll see you on the other side”. This statement was made just before the radio silence as the rocket circled the moon. The story has it that the transmission between the Apollo 8 vessel and the Nasa station back on earth was blocked by the moon. The world held its breath as the Apollo 8 crew had to come back around to the other side of the moon before the comms went back on and they could carry on the conversation.

One thing that is for certain is that this watch will no doubt be a conversation starter. It has a unique sporty look and as a limited edition, it will stand out from most Omega Speedmasters that one will encounter. 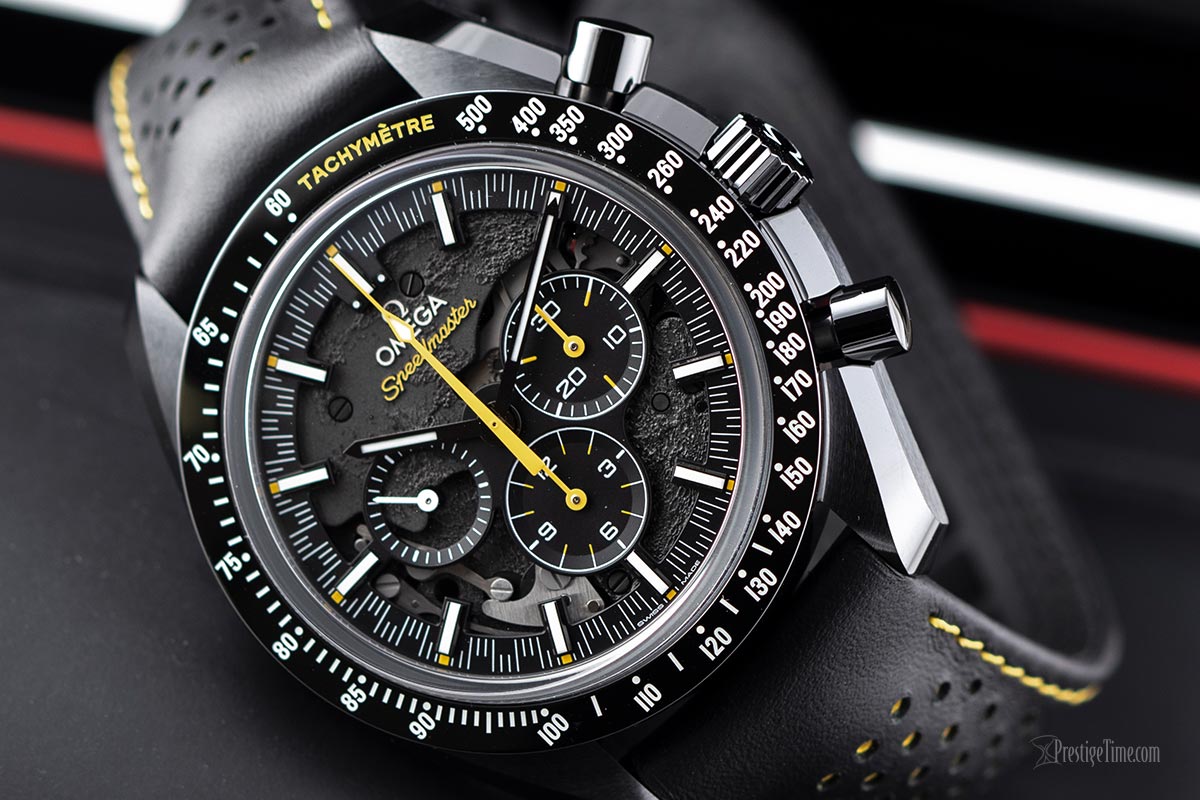