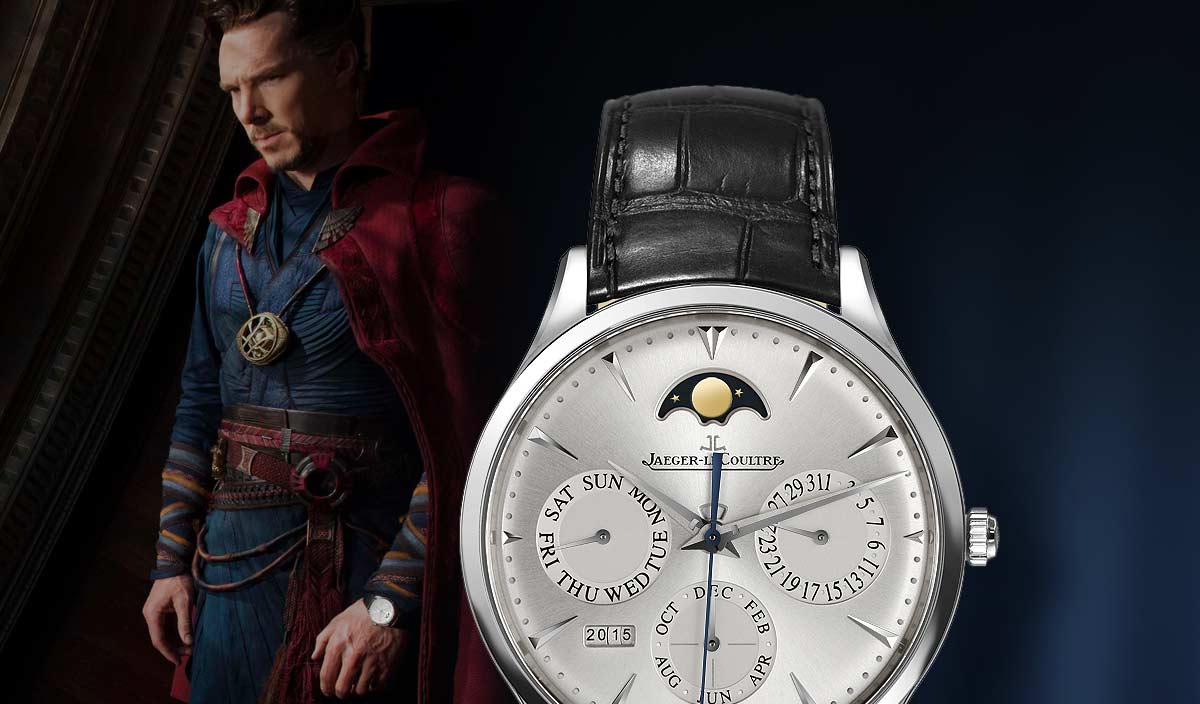 Marvel's superhero is not only a master mystic but he can alter time itself. What watch was Dr Strange wearing? Can you guess which luxury timepiece he chooses to wear?

One of the most heart-wrenching moments in the story of the new Doctor Strange movie is when Dr. Stephen Vincent Strange, a world-renowned neural surgeon is speeding while checking his phone and wraps his $200k+ Lambo around a tree. That was only one of the hardest things to witness in the story. The absolute most painful thing to watch in this epic Marvel film would be what happens to his JLC Master Ultra Thin Perpetual watch which he carefully selects from a huge drawer with built-in SwissKubiK watch winders.

The in-drawer watch winder appears to accommodate at the very least, a dozen really high-end luxury watches from several top Swiss watch brands including Jaeger-LeCoultre, Rolex, and a few more in his collection.

What watch was Dr. Strange wearing? The Jaeger-LeCoultre Dr. Strange watch is unique in a way for a few reasons. What watch does Dr. Strange wear from JLC? First and foremost, the watch that he wears (and utterly destroys) in the film is the JLC Master Ultra-Thin Perpetual Men's Watch model # 130842j, and just for the movie, it was a style that was a "not on the menu"  model in terms that it was uniquely outfitted with a solid case back which is quite different from the original watch which has a transparent sapphire crystal on the case back. It appears that Jaeger-LeCoultre made a special effort for this film to get high retention product placement for their products based on how many films in which their products have been prominently featured in the past few years such as the one discussed here and another great movie. Who gave Dr. Strange's watch to him? Aside from using a solid case back instead of a see-through crystal, it had a personalized and touching inscription from Christine (played by Rachel McAdams) saying: "Time will tell you how much I love you."

It must have been extremely painful for their watchmakers to see one of these beauties get smashed to pieces. Then again they also made scrap metal out of a Lamborghini at the onset of the film. The film has a lot to do with time and it appears to be a carefully selected placement for Jaeger-LeCoultre to ensure that the watch Dr. Strange wore in the movie was one of theirs. They also managed to squeeze in a special edition of their iconic Reverso watch which has a reversible case. Looks like it was the Jaeger LeCoultre Grande Reverso Rouge 1931 reference # Q278856J but this watch was actually never worn in the movie. It was just seen being wound in his winder drawer. Among other watches in the surgeon's impressive watch collection were the TAG Heuer Monaco chronograph and the Rolex Cosmograph Daytona. Although not the best I've seen to date, you can still see that the Doctor's wristwatch collection was in fact quite impressive. Benedict Cumberbatch's role in MCU's Spiderman: No Way Home, released in 2021, and the 2022 sequel to the original film, Doctor Strange Multiverse Of Madness are great examples of many different components coming together to work like a tightly wound watch.