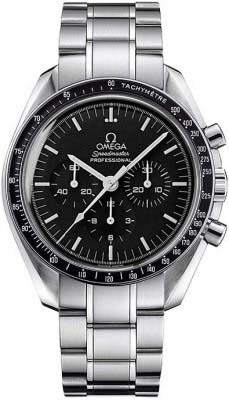 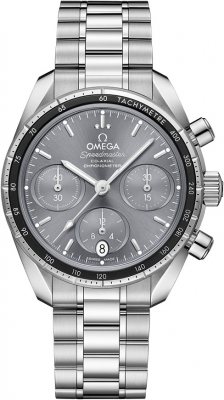 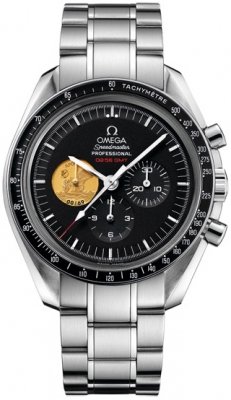 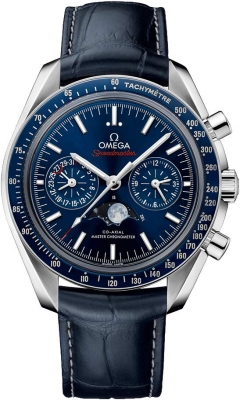 A more modern interpretation of the classic Omega Speedmaster watches would be the Speedmaster Moonwatch Chronograph which is equipped with OMEGA's calibre 9300/9301 with a Co-Axial escapement & the Si14 silicon balance spring, a perfect blend of the iconic Speedmaster legacy with advanced watchmaking. From the Speedmaster Moonwatch Chronograph Omega offers a spectacular sub-collection made completely of ceramic, aptly named the Omega Speedmaster DARK SIDE OF THE MOON & the GREY SIDE OF THE MOON or otherwise known as the DSOM and GSOM by watch aficionados. The Dark Side has a few themed varieties such as the BLACK BLACK for its completely black look, the SEDNA BLACK for a Black ceramic & Sedna/Rose Gold combination, the PITCH BLACK which is distinguished by Super-Luminova on its dial & bezel and the VINTAGE BLACK which has brown colored Super-Luminova & a stressed brown strap giving the watch a more classic appearance.

Of important historic value are the Speedmaster re-edition models. The notable Speedmaster Mark II watch is a re-edition of a classic model introduced in 1969, this newer version features OMEGA's patented extendable fold-over rack-and-pusher clasp and is powered by the Co-Axial calibre 3330, a self-winding movement complete with an Si14 silicon balance spring and a column-wheel chronograph mechanism. The Speedmaster â€˜57 is named after the iconic first generation Speedmaster model, with subtle nods to the original such as the famed Broad-Arrow hands and straight lugs design.

Omega's Speedmaster Racing collection is a more contemporary design featuring a comfortable 40mm case with a range of color combinations. This Speedmaster Chronograph features a tachymetre scale on the bezel & date display.

While mechanical watches are part of Omega's heritage, an advanced multi-function quartz digital-analog watch is part of the Speedmaster watch line. Designed especially for space explorers, the Speedmaster Skywalker X-33 watch with its impressive variety of functions has been developed to meet the needs of astronauts. The European Space Agency (ESA) has approved this remarkable timepiece for inclusion in all of its missions. A special limited edition version has been dedicated to celebrate Omega's partnership with the Solar Impulse Project whose aim is to circle the globe in an airplane powered only by the sun. The OMEGA Speedmaster Skywalker X-33 Solar Impulse Limited Edition watch features a grade 2 titanium outer case, the back is stamped with the Solar Impulse "Around the World" patch and engraved with the words "TESTED AND QUALIFIED BY ESA" (the European Space Agency). The OMEGA Speedmaster Skywalker X-33 is powered by the multi-functional quartz chronograph movement, OMEGA calibre 5619, with a thermo-compensated integrated circuit.

The Omega Speedmaster Spacemaster Z-33 is another digital-analog watch full of advanced functions. Inspired by the original shape of the legendary Omega Pilot's Line, Flightmaster 1969, the OMEGA Spacemaster Z-33 combines its instantly recognizable design with an advanced multifunction quartz movement. Designed for pilots, the Spacemaster Z33 is housed in a grade 5 titanium case & has amazing legibility even in the most dark environments.

Omega offers an elegant Speedmaster Chronograph for women, while maintain the DNA of the Speedmaster design, the Speedmaster Ladies' Chronograph possess definite feminine lines. Available in a 38mm case with a ceramic bezel featuring a tachometer scale or a bezel set with diamonds. The watch is powered by Omega's COSC-certified 3304 calibre, a self-winding chronograph with a date window. .