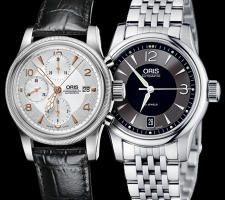 All    Men's Collection   Women's Collection   On Sale
Buy an Oris watch from Prestige Time, we offer discounted prices, great service and free shipping. Large selection of Oris wristwatches in stock. Oris features diving, pilot and racing watches as well as classic dress and ladies watches too. Among the many Oris watches we stock you are sure to find your favorite watch at a low price.
Shop by Collection 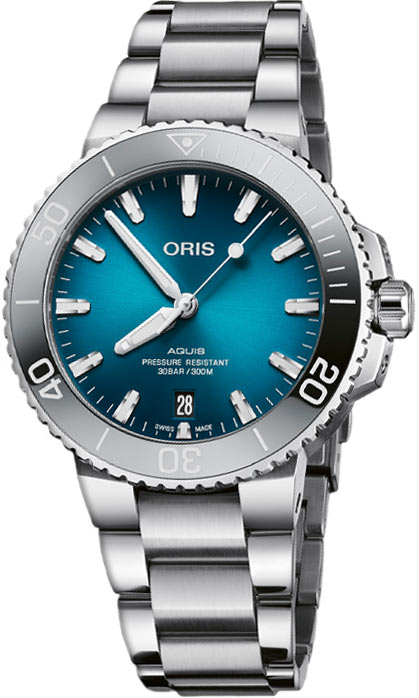 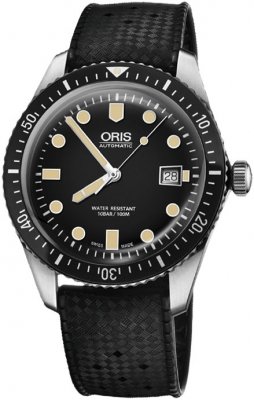 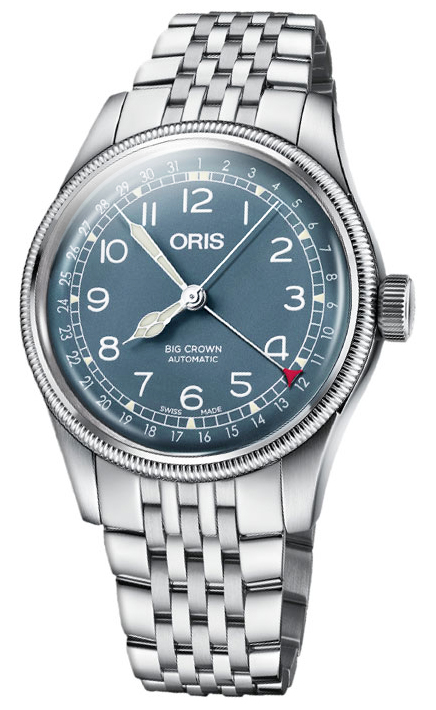 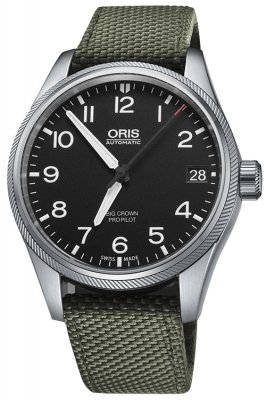 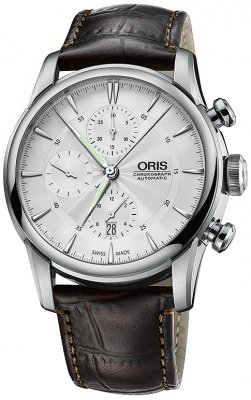 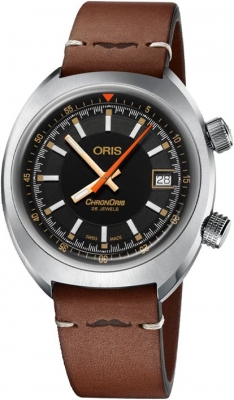 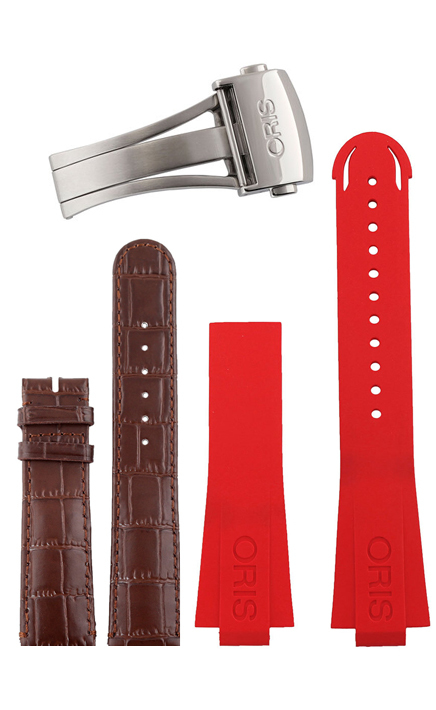 Oris watches combines art, precision and performance in their various collections of aviation, diving and motor sport watches. Oris is very popular with Formula One celebrities, Jazz legends like the legendary Thelonious Monk and many more public figures. Oris heavily emphasizes that they only create mechanical watches and to date have never releases a battery powered watch. The red rotor found in all Oris timepieces are the trademark and is a signature of their craft that symbolizes the energy that propels all Oris wristwatches. Since 2014, Oris announced two new movements, the caliber 110 movement and most recently the new in-house Oris calibre 111 movement.

Oris timepieces are divided among several families of series and collections. They are the Aquis, Artelier, Artix, Rectangular, Classic, ProDiver, Divers, Oris Big Crown ProPilot , Oris BC3 , BC4, Oris Big Crown, Air Racing Edition, Williams, Audi Sport, Artix GT, TT1, TT3, RAID, Calobra and Chronoris. These families are found under any of three main categories; Aviation Watches, Diver's Watches, and Motor Sport Watches. Other watches may fall into the categories and series of special edition and limited edition watches that were created in tribute to many iconic figures, musical legends such as the legendary Bob Dylan and particularly, the Jazz greats such as Louis Armstrong, Thelonious Monk, Oscar Peterson, John Coltrane, Miles Davis, and more.

From their very humble beginnings in 1904 when they purchased a closed down watch firm called Lohner & Co., Oris, who at the time only had about two dozen employees. Oris grew to be one of the leading Swiss watchmakers and their luxurious watches can be found around the globe. Only two years after opening in 1904, Oris expanded and built the first of ten Oris branches in Switzerland. Within seven years of opening its doors, the company grew to over 300 employees, began building housing and apartments for their workforce and became the largest employer in Holstein.

After 1925, they opened an electroplating factory that specialized in in high caliber yet cost effective watches compared to the other manufacturers. The factory was situated in Herbetswil and began to include buckled bracelets for their pocket watches turning them into wristwatches. With their pin lever movements, their watches were finding proud owners all across England and their respective colonies and more and more so in South America.

In 1927, Oris became a public company after the passing of Georges Christian, one of the founding fathers of the company. His brother-in-law, Mr. Oscar Herzog took over the position as the CEO and stayed there until 1971 while Oris continues on its path of steady growth.

The year is 1937, and Oris opens its dial factory in Bienne Switzerland. By 1938, Oris was a manufacturer that believed in the values of integration in the workforce. At that point Oris produced their own escapements and hired many skilled women and paid them well to do this type of sophisticated work. Oris was such a great working environment that for a period of 40 years from the year 1941 to 1981, they had a canteen that catered food for their employees every day.

In the year 1944, Oris receives a Certificate of Legitimacy from the Office of Precious Metal Control in Switzerland attesting to the high quality of the gold plating found on their watches a quality soon to be recognized across the globe.

Oris continues to grow and between the years '46 and '81, Oris buses transported their nearly eight hundred employees to their numerous factories. Shortly after the Second World War, as the demand for water resistant watches grew, Oris introduced their very first water-resistant Oris watches.

In 1952 with the introduction of the 601 movement from Oris, a demand for this automatic self-winding power reserve movement is generated that can still be felt today and by the 1960's, Oris with their upwards of 800 employees is considered one of the largest watch companies in Switzerland.

The 25 jewel Oris 645 movement, the famous automatic Oris movement hits production and by the year 1968, Oris is awarded the official certification as an official certified chronometer for the Oris 652 movement, a designation awarded to only the finest, most accurate Swiss movements.

The year is 1970 and a holding company named ASUAG, now the huge Swiss watch conglomerate known as the Swatch Group had their eyes on Oris and bought up all the company's shares. Once purchased, ASUAG devised strategy for their newly acquired watch brand that turned out to be a terrible strategy and they dedicated a strict niche to Oris as the producer of not so pricy watches and cheaper quartz watches. In the late seventies, when the watch industry was suffering badly, Oris suffered unavoidable losses and had to close the doors on many of their different branches.

Luckily, there was hope on the horizon when in 1982, Oris was ultimately bought out by a Dr. Rolf Portman and Ulrich Herzog and by 1984 Oris made a huge comeback with their Pointed Calendar. Ulrich Herzog, the company's new CEO goes back and forth to and from Japan and is fascinated with the way the Japanese are intrigued by the mechanical workings of their watches. At the time, Japan had an economy that was superior to the rest of the globe and Oris, with a newfound direction focuses dominating a market segment for competitively priced mechanical watches that featured exceptional movements.

In 1991, a complex watch movement known as the Oris cal. 581 is created and features several complications such as moon phase, week day, date and a dual time zone complication. This movement is still to this day, considered a trophy for many watch collectors.

In 2009, the RSS or Rotation Safety System is introduced and Oris applied for a patent for the new safety element that will change the Oris diving watch. This system was first implemented on the Oris ProDiver Chronograph. Oris also unleashes the new Oris 653 movement featuring a twenty-four hour time display and with the continuity of the Blue Eagles Helicopter Display Team sponsorship, a new special edition watch featuring the new 24 hour display is conceived.

Fast forward to 2012 and Oris is once again at the forefront of all the action. Between 2010 and 2012 the Swiss watchmakers at Oris released numerous watches from the Oris Carlos Coste Limited Edition Cenote Series in celebration of his Guiness World Record in free diving. Following by the development of the Oris Swiss Hunter Team PS Edition watch, to help financially support the maintenance of the Patrouille Suisse Hunter Plane by the Oris sponsored Swiss Hunter Team. Oris watches then created the Oris Chet Baker Limited Edition watch; a tribute the great Jazz legend, Chet Baker.

2013 brought about another Oris tribute to yet another Jazz virtuoso and composer, the great John Coltrane with the Oris John Coltrane Limited Edition watch. Oris also produced two new watches in 2013 the Oris Artelier Translucent Skeleton watch with its astonishing design and visible movement. The Oris Pro Diver series also welcomed a new sibling that year with the introduction of the Oris ProDiver Pointer Moon watch. This is an iconic watch and the first of its kind, a mechanical watch with lunar cycle and tidal wave indicators.

Oris is to this day, one of the few remaining independently owned Swiss made watch companies. Orises are all constructed by Swiss craftsmen, the type of craftspeople who for hundreds of years have had mechanical watchmaking engraved in their DNA. Every Oris watch that leaves the manufacture in Holstein goes through merciless quality control testing to ensure the quality of the timepiece and as a way of asserting their faith in their watch's structural superiority; they each come with the Oris 3 year warranty.