The most trusted name in luxury watches!
Free Shipping within the USA!
PLEASE NOTE: Please click here to view our schedule for Sep/Oct 2022 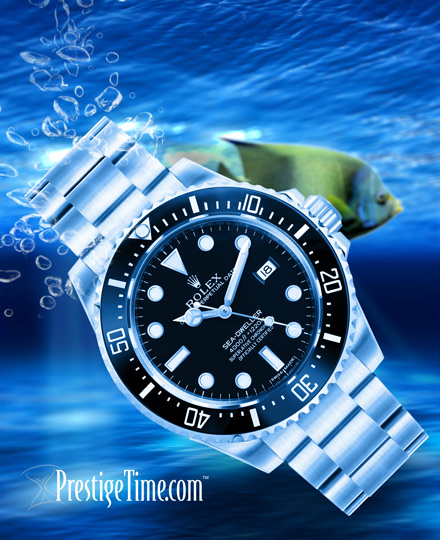 A watch rated as Water Resistant may come in contact with water to a predetermined extent. Most watches are classified by the degree until which depth of immersion is safe. It is important to remember that a water resistant rating is based upon optimum conditions in a laboratory. Real life experience and aging of the gaskets will effectively decrease the manufacturer's specifications of water resistance over time. Water coming in contact with the movement is the worst scenario that can happen to a watch. Thus, we strongly suggest that you always work well within the parameters of the manufacturer's recommendations and have your watch tested at least once a year. Any competent watchmaker has the necessary equipment to test water resistance.

The water resistance on a watch is obtained by three important factors:

When a watch is tested by the manufacturer it is done in a laboratory under optimum conditions, such as a fresh gasket, sitting stationary in a pressured water tank and with still/motionless water. However, real life action will produce completely different results. Here are a few scenarios:

The U.S. FTC (Federal Trade Commission) which enforces the truth-of-advertising has deemed the term "Waterproof" inappropriate. In their opinion, a watch can never be 100% truly impervious to water, as the gaskets deteriorate over time and exposure, thus reducing the specified depth of water resistance. In the words of the FTC "The word proof connotes a measure of absolute protection that unfortunately does not exist with respect to watches, especially over prolonged periods of time." The FTC has found the term Water Resistant to be more appropriate. 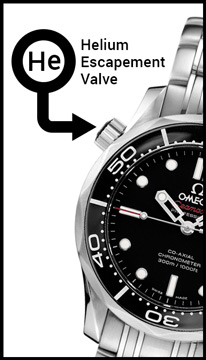 The Helium Escape/Relief Valve is used only in extreme deep diving expeditions when a diver operates from a diving bell. As the bell is lowered pressure begins to increases and helium is added to the breathing mix. The helium is added to remove toxic air created by the extreme depth.

The helium escape valve never needs to be used in regular scuba diving unless diving in a controlled environment as described above.

Interpretation of the Depth Ratings

Although a watch may be rated 30m/99ft water resistant, it does NOT mean that the watch can be immersed to that depth. The depth rating posted by the manufacturer is theoretical in nature and can only be achieved in a perfectly optimum environment of a laboratory - which is impossible to replicate in real life.

Obviously, the higher the rating, the more appropriate the watch is for deeper diving.

IMPORTANT: We strongly recommend purchasing a watch with a screw-down crown if you intend on wearing the watch while you are in contact with water.