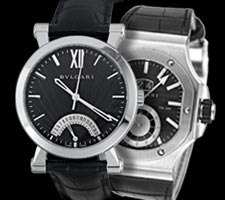 All    Men's Collection   Women's Collection   ON Sale
Buy a Bulgari Watch from our large, in stock selection at Prestige Time and get award-worthy service and a discounted price. Bulgari is synonymous with haute couture and luxury Swiss watches. Bulgari watches embody Italian design and creativity from the aesthetics down to the Swiss movements that power them. Bulgari timepieces are very popular and have numerous celebrity brand ambassadors.
Shop by Collection 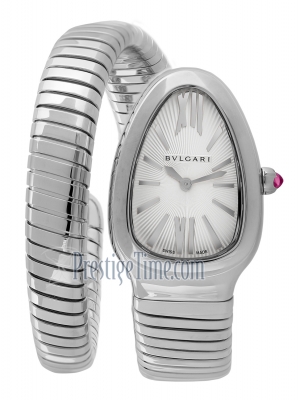 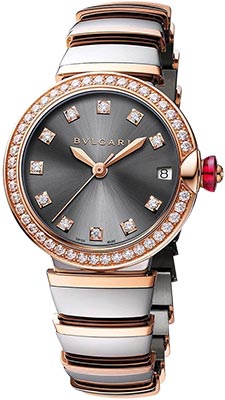 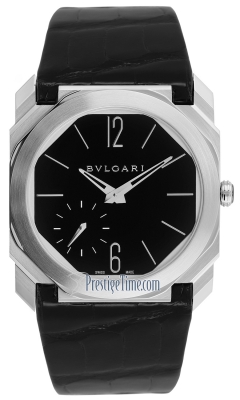 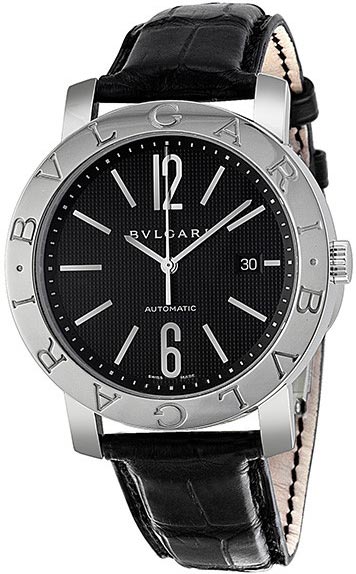 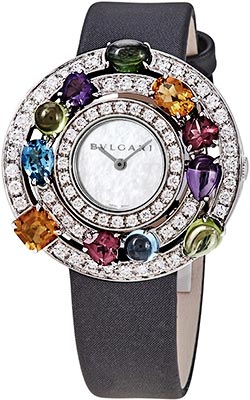 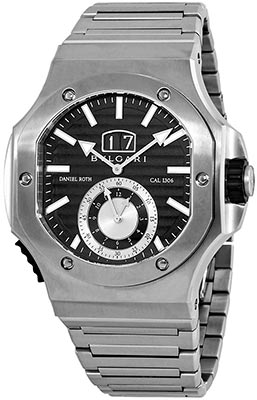 Bulgari watches get their name from their founder Sotir Bulgari who lived from 1857 to 1932. He started off as a jeweler in his hometown of Paramythia which was located in a Greek city called Epirus and was the child of Bulgarian immigrants. He moved from there to Corfu and then to Naples and by 1881 set out for Rome. When in Rome, he established his company and soon thereafter opened his second store in Via Sistina. The shop that he opened in Via Sistina was later substituted for what is now their flagship location in Via dei Condotti which was opened in 1905 by Sotir Bulgari and his two children, Constantino Bulgari and Giorgio Bulgari. Although Bulgari watch production only commenced in 1980 with the establishment of Bulgari Haute Horlogerie SA in Neuchatel.

It takes around one year to assemble, adjust and decorate a single Bulgari Grande Complication such as their chiming watches, tourbillons, perpetual calendar watches and moon phase watches, some of which combine up to one thousand components. Armed with the know-how and an undying passion for design and the pursuit of nothing but excellence, Bulgari brings forth numerous watch collections that are truly unique and iconic.

Bulgari watches has over 500 employees and develops its own Swiss watch movements and parts which include some high complication calibers. Bulgari also acquired two watch companies which are Daniel Roth and Gerald Genta .

Bulgari also makes the thinnest tourbillon movement in the world found in the Bulgari Octo Finissimo Tourbillon watches in the Octo by Gerald Genta collection, one of the watchmakers that Bulgari absorbed under their brand. This collection features several series of stunning Octo watches including the Octo Automatic, Octo Velocissimo Chronograph 41mm, the Octo Finissimo Extra Thin 40mm, The Finissimo Tourbillon 40mm, The Octo Bi Retro and the Octo Quadri Retro 45mm, possibly the largest Bulgari watch. 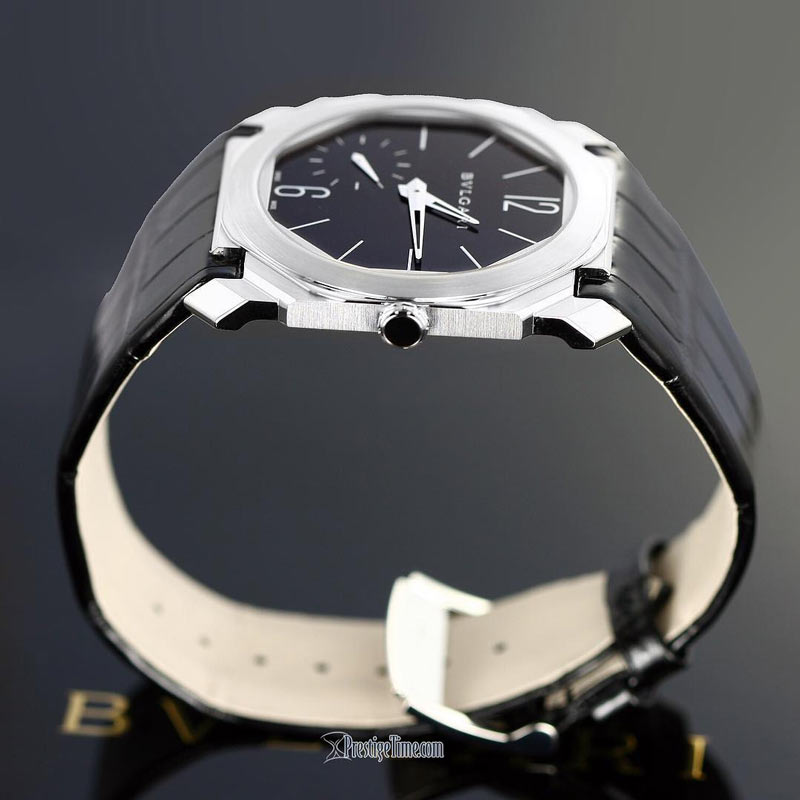 Bulgari Serpenti is a truly iconic watch historically and mythically inspired. Bulgari Serpenti is a jewelry watch by BLVGARI that spirals around the wrist of the person wearing it. Entwined throughout thousands of years of our earth's history from the story of Eve and the Snake to the serpent that adorned the heads of the Pharaohs, this reptilian creature had played its seductive role in history and is believed in mythology and folklore to hold great secrets and esoteric knowledge. Serpents once again play a powerfully seductive role in human history with the Serpenti jewelry and watches from Bulgari. The Bulgari Serpenti coils around the bearers wrist either once, twice or multiple times to bring an unprecedented exotic style. The Bulgari Serpenti Tubogas, a 35mm watch with a unique Tubogas bracelet design is available in white gold, rose gold, and yellow gold. The dial is shaped like a snake's head and is available in silver, black, or radiant diamonds. The Bulgari Serpenti Spiga ladies watch features higher contrasting colors and diamond encrusted materials such as white ceramic and stainless steel, stainless steel and ceramic, white ceramic and rose gold as well as black ceramic and rose gold.

The Bulgari LVCEA watch is a bold yet sensual design available as a 33mm with an automatic self-winding movement as well as a 28mm case powered by a quartz movement. According to the Italian designer this watch got its inspiration from the sundial, the most ancient mechanism for tracking time. The Bulgari Lucea watches are radiant and intentionally named after the Italian word for light LUCE. Proud of this new addition to their watch family, the Italian fashion icon alluded to the fact that these watches were designed for women with only the finest taste and how this watch symbolizes how Bulgari Italian watches are but an extension of their luxury Italian jewelry.

The Bulgari Diagono is a collection of many finely crafted timepieces with several series in the Diagono watch family including the Diagono Diver, Scuba, Velocissimo, Ultranero Chronograph, and their high tech Diagono Magnesium. The latter watch uses a lightweight and strong metal, Magnesium, often used in aerospace and PEEK, a futuristic polymer and lacquer originating on the coating on the engines of Italian sports cars. For maximum performance and reliability, Bulgari uses these state of the art materials on their collection of elegant yet sporty Bulgari watches. Two Bulgari watches from this collection were worn by Robert Downy Junior's character Tony Stark in the Marvel movie Ironman.

The Bulgari Diagono professional collection takes the Bulgari Diagono line of watches a step further with some cutting edge professional features such as GMT, Chronograph these 42mm watches vary in design and come in stainless steel and some in yellow gold featuring rubber and stainless steel bracelets and also brown alligator / crocodile leather straps. Dial colors include silver with a vertical stripe patter, grey with a globe motif, black with engraved steel plate pattern as well as a plain black dial color.

Bulgari created numerous trendy jewelry watches over the year. One such jewelry watch is the Bulgari B Zero 1 collection of Quartz watches which are smaller faced watches at only 23mm in diameter with many different design configurations. Bulgari B zero 1 watches are available white dial or black dial and with bracelets constructed in materials such as Stainless Steel, Rose Gold, Black ceramic and white ceramic as well as a calfskin leather strap.

Bulgari also created several classics including the Bulgari Sotirio Bulgari, a 42mm watch named after the founder of Bulgari watches which includes models that have complications such as Central Date, Retrograde Date and Annual Calendar. This collection is designed with elegant lines tracing the company's history from the past to the present and features Roman Numeral hour markers at the 12 o'clock and 6 o'clock positions. This Bulgari watch is available with an 18kt rose gold case and a stainless steel case with dials in black, silver and white we can also find the Sotirio Bulgari watches with either a stainless steel bracelet or an alligator / crocodile leather strap in either black or brown.

Bulgari is not only a famous Italian designer and Swiss made watchmaker, they also manufacture Italian jewelry, luxury items, perfumes, fashion accessories and even hotels. Although the Bulgari brand mark is always displayed in its original Latin form, Bulgari, one pronounces it "Bulgari". They are a luxury watch brand that is proud of its strong and deep roots in Italy and they are known for blending the creative art Italian designers with the methodical and intricate science and mechanics of Swiss watchmaking. Understanding how the symphonic arrangements of hundreds of components come together in perfect harmony is an art form that and wisdom that Bulgari watchmakers know intimately.