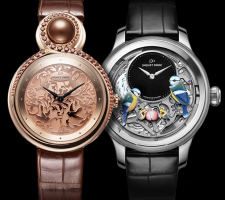 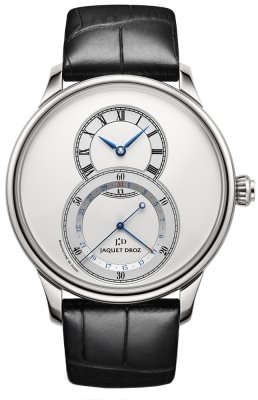 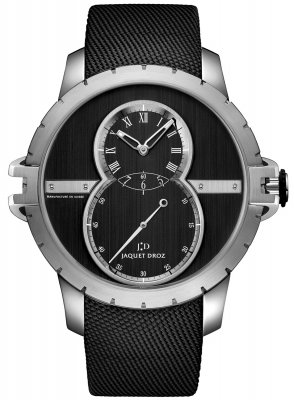 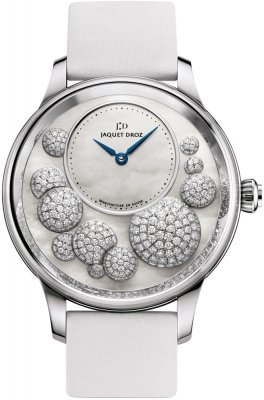 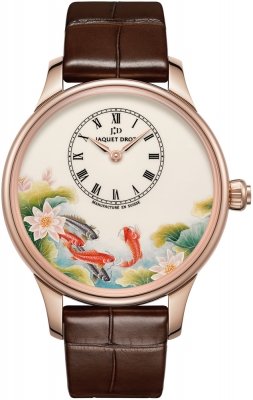 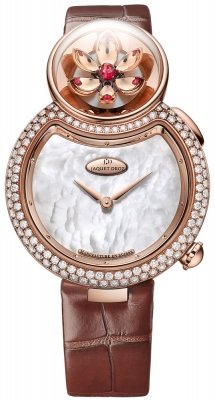 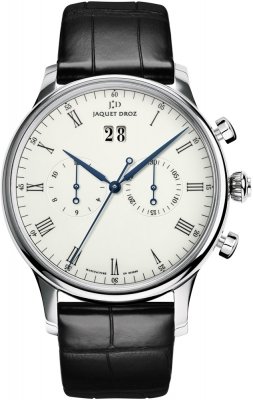 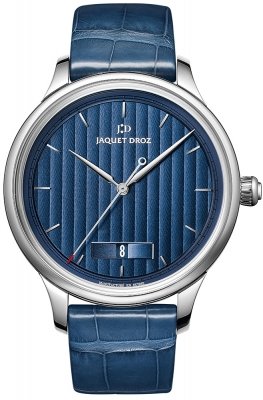 Jaquet Droz watches have always held high standard both in their intricate mechanical workmanship and sophisticated design. The ingenious French founder of the company, Pierre Jaquet-Droz, began attracting the attention of the world with his production of extraordinary grandfather clocks, complete with music and automata, in 1738. Partnering with his son, Henry Louis Jaquet-Droz, and neighbor, Jean-Frédéric Leschot, he created exceptional timepieces and automata which, by the mid-1770s, were renowned throughout the royal courts of the civilized world for their unsurpassed revolutionary innovation and elaborate aesthetics. With the popularity of his masterpieces escalating, Jaquet Droz opened a second workshop in London's newly developing commercial district. Soon his company was represented in China, India and Japan as well. The Jaquet-Droz and Leschot then moved to Geneva, opening the city's first watchmaking manufacture. By the late 18th century, Jaquet Droz creations were sold and displayed all through Europe and the Far East.

As Jaquet Droz traveled, exhibiting his unique mechanical creations with the royal courts of the civilized world, Beijing emperor of the Qing Dynasty, Qianlong, was riveted by these works of art and proceeded to set up a national office to import and trade Jaquet Droz's marvels. A fusion of distinguished creativity and contemporary functionality is conveyed in the many varying models of the Majestic Beijing Collection. The Twelve Cities, The Eclipse, The Time Zones and The Grande Heure all convey a distinctive modern glamour.

The most ingenious Jaquet Droz mechanical complications developed from Pierre Jaquet Droz's original workshop in La Chaux-de-Fonds. In the La Chaux De Fonds Complications Collection, watches like The Chronograph Monopusher, The Rattrapante, The Tourbillon and The Quantieme Perpetual Eclipse display complications with a grace and simplistic elegance unique to Jaquet Droz designs.

The legendary luxury decoration of the Jaquet Droz family is reflected in the Les Ateliers D'Art Collection. Elaborate enamel painted motifs, sculpting, engraving and paillonne enameling decorate the dials of these exceptional Jaquet Droz watches in tribute to the venerable, fame- engendering art of the founders.

Some of the most fascinating creations of Jaquet Droz use automata such as can be found in the Lady 8 petite collection. Each mechanical movement is immaculately finished with techniques such as côtes de genève, and combinations of other techniques which cause the caliber to be decorated and illuminated when light catches it. Jaquet Droz is known for using very high end materials which are often challenging to work with and often takes a few tries before even one perfect one is produced. This type of dedication lead to the use of many materials such as black enamel, which can be found in the black enamel grande seconds, other collections that use exotic materials are ivory enamel grande seconde, aventurine grande seconde, grande date email, onyx grande seconde, silver grande sconde. Or the combination of two challenging materials such as enamel and ivory that can be found in the email ivoire watches.

Many high complications have been used in watches from Jaquet Droz such as the Petite Heure Minute Relief, Grande Seconde Tourbillon, Grande Seconde Deadbeat, Grande Seconde Quantième. Artistic hand-painted and creatively crafted dials are can be commonly found in the various collections such as the Ateliers D'art. Some of their magnificent watches have hand made reliefs on their dials. The Dragon Petit Heur Minute would be a great example of such creativity.